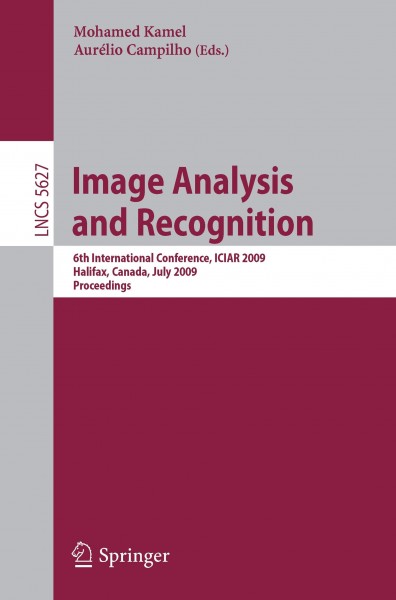 ICIAR 2009, the International Conference on Image Analysis and Recognition, held in Halifax, Canada July 6-8, 2009, was the sixth in the ICIAR series of - nual conferences alternating between Europe and North America. ICIAR 2004 was held in Porto, Portugal, ICIAR 2005 in Toronto, Canada, ICIAR 2006 in P¿ ovoa do Varzim, Portugal, ICIAR 2007 in Montreal, Canada, and ICIAR 2008 in Pov ¿ oa do Varzim, Portugal. The idea of o?ering these conferences came as a result of discussion between researchers in Portugal and Canada to enco- age collaboration and exchange, mainly between these two countries, but also with the open participationof other countries,addressing recent advances in the theory, methodology and applications of image analysis and recognition. For ICIAR 2009,wereceiveda total of 164full papersfrom 34 countries. The review process was carried out by the Program Committee members and other reviewers; all are experts in various image analysis and recognition areas. Each paper wasreviewedbyatleasttwo reviewers,andalsocheckedbythe conference Co-chairs. In all, 93 papers were ?nally accepted (45 oral presentations, and 48 posters) and appear in these proceedings. This year, di?erent from previous years, we opted for single sessions rather than parallel sessions to encourage participation in all sessions. The high quality of the papers is attributed ?rst to theauthors,andsecondtothequalityofthereviewsprovidedbytheexperts. We would like to thank the authors for responding to our call for papers, some are returningauthorswhoattendedpreviouseditionsofthe conferenceandsomeare new. We would like to sincerely thank the reviewers for their careful evaluation andtheexcellentfeedbacktheyprovidedtothe authors. von Campilho, Aurelio