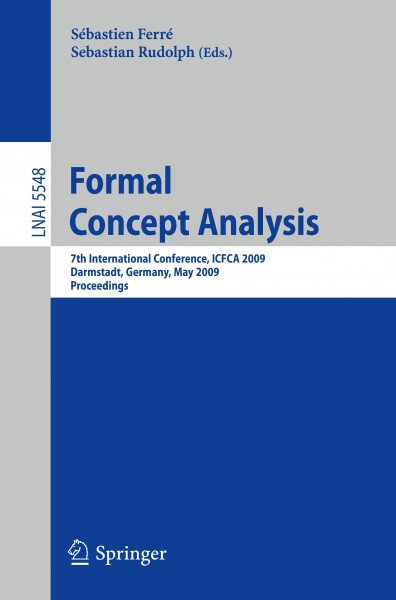 The discipline of formal concept analysis (FCA) is concerned with the form- ization of concepts and conceptual thinking. Built on the solid foundation of lattice and order theory, FCA is ?rst and foremost a mathematical discipline. However,its motivation andguiding principles arebasedon strongphilosophical underpinnings. In practice, FCA provides a powerful framework for the qua- tative, formal analysis of data, as demonstrated by numerous applications in diverse areas. Likewise, it emphasizes the aspect of human-centered information processing by employing visualization techniques capable of revealing inherent structure in data in an intuitively graspable way. FCA thereby contributes to structuring and navigating the ever-growing amount of information available in our evolving information society and supports the process of turning data into information and ultimately into knowledge. In response to an expanding FCA community, the International Conference on Formal Concept Analysis (ICFCA) was established to provide an annual opportunity for the exchange of ideas. Previous ICFCA conferences were held in Darmstadt (2003), Sydney (2004), Lens (2005), Dresden (2006), Clermont- Ferrand (2007), as well as Montreal (2008) and are evidence of vivid ongoing interest and activities in FCA theory and applications. ICFCA 2009 took place during May 21-24 at the University of Applied S- ences in Darmstadt. Beyond serving as a host of the very ?rst ICFCA in 2003, Darmstadt can be seen as the birthplace of FCA itself, where this discipline was introduced in the early 1980s and elaborated over the subsequent decades. von Ferrè, Sèbastien und Rudolph, Sebastia