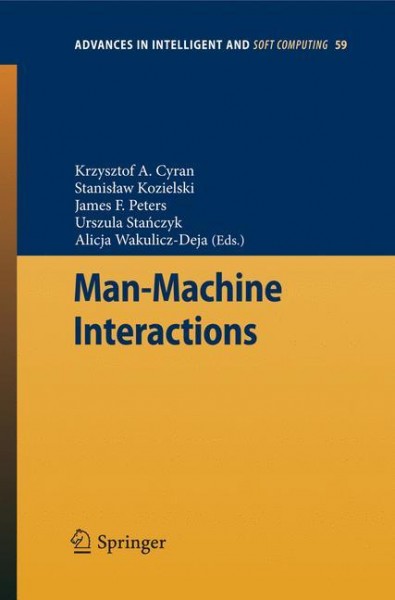 The International Conference on Man-Machine Interactions (ICMMI 2009) commemorates the life and work of Adam Mrózek (1948-1999). From 1970, he worked at the Institute of Theoretical and Applied Informatics, Polish Academy of Sciences, and from 1992 at the Institute of Informatics, Silesian University of Technology, Gliwice, Poland, in 1998 taking the post of a Vice Director of the Institute for Researchand the head of the Computer Systems Theory and Design Division. During his lifetime the scienti?c interests of A. Mrózek were highly diversi?ed. This ICMMI 2009 volume re?ects a number of research streams that were either directly or indirectly in?uenced by Adam Mrózek's work on the dev- opment of computer systems and software that makes it possible to employ them in a variety of human activities ranging from logic studies and arti?cial 1 2 3 intelligence , rule-based control of technological processes , image analysis , 4 expert systems and decision support , to assistance in creative works. In particular, this ICMMI volume points to a number of new advances in man-machinecommunication,interactionbetweenvisualizationandmodeling, rough granular computing in human-centric information processing and the discovery of a?nities between perceptual granules. The topical subdivisions of this volume include human-computer interactions,decision support, rough 1 Jankowski, A., Skowron, A.: Logic for arti?cial intelligence: A Rasiowa-Pawlak school perspective. In:Ehrenfeucht,A., Marek, V.W., Srebrny,M. (eds.) Andrzej Mostowski and Foundational Studies, pp.92-105. IOSPress, Amsterdam(2008). von Cyran, Krzysztof A. und Kozielski, Stanislaw und Peters, James F. und Stanczyk, Urszula und Wakulicz-Deja, Alicja