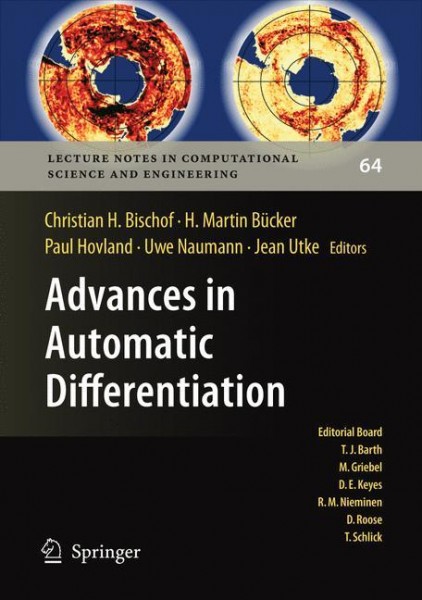 The Fifth International Conference on Automatic Differentiation held from August 11 to 15, 2008 in Bonn, Germany, is the most recent one in a series that began in Breckenridge, USA, in 1991 and continued in Santa Fe, USA, in 1996, Nice, France, in 2000 and Chicago, USA, in 2004. The 31 papers included in these proceedings re?ect the state of the art in automatic differentiation (AD) with respect to theory, applications, and tool development. Overall, 53 authors from institutions in 9 countries contributed, demonstrating the worldwide acceptance of AD technology in computational science. Recently it was shown that the problem underlying AD is indeed NP-hard, f- mally proving the inherently challenging nature of this technology. So, most likely, no deterministic "silver bullet" polynomial algorithm can be devised that delivers optimum performance for general codes. In this context, the exploitation of doma- speci?c structural information is a driving issue in advancing practical AD tool and algorithm development. This trend is prominently re?ected in many of the pub- cations in this volume, not only in a better understanding of the interplay of AD and certain mathematical paradigms, but in particular in the use of hierarchical AD approaches that judiciously employ general AD techniques in application-speci?c - gorithmic harnesses. In this context, the understanding of structures such as sparsity of derivatives, or generalizations of this concept like scarcity, plays a critical role, in particular for higher derivative computations. von Bischof, C. und Bücker, Martin und Hovland, Paul und Naumann, Uwe und Utke, Jea