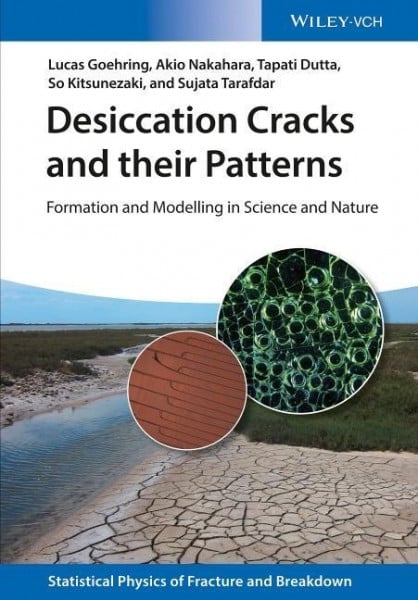 Desiccation Cracks and their Patterns

Sujata Tarafdar joined the faculty of Jadavpur University, Kolkata, in 1990 and at present is a Professor of Physics there. Her research interest covers: fractals and disordered systems, pattern formation in nature, viscous fingering and crack networks, soft condensed matter, porous media and polymer electrolytes. She is coordinator of the Condensed Matter Physics Research Centre, Jadavpur University and general secretary of the Indian Society of Nonlinear Analysts. She is on the editorial board of Frontiers in Physics (Nature publishing group) as a review editor. Akio Nakahara is the Associate Professor of Physics at Nihon University, Japan. Having obtained his PhD degree at Kyushu University, he spent four years as a PostDoc at Chuo University, and then joined Nihon University. He has worked on the Physics of Pattern Formation, and recently he found a method to control morphology of crack patterns using memory effect of plastic fluid. Tapati Dutta is an Associate Professor in the Physics Department of St. Xavier's College, Kolkata, India. Having completed her Master's degree from Calcutta University and her PhD from Jadavpur University, she joined the Physics Department of St. Xavier's College in 1990 and has been continuing since then. She formerly was Head of the Department and is at present Dean of Research of St. Xavier's College. She is a member of the academic committee of the Condensed Mater Physics Research Centre of Jadavpur University. Dr. Dutta is also a member of the Indian Society of Non-linear Analysts. Her research interests are condensed matter physics and nonlinear dynamics. So Kitsunezaki is an Associate professor of the department of physics at Nara women's university, Japan. After receiving his PhD at Kyoto University in 1997, he has taught in the university until now. He specialises in nonlinear dynamics and pattern formation. He studied the pattern formation of mud cracks and columnar joints of starch, theoretically and experimentally, and his current interests include the fracture mechanics of paste and wet granular materials. Lucas Goehring leads a research group at the Max Planck Institute for Dynamics and Self-Organization, and teaches at the nearby Georg-August Universität Göttingen. He obtained his PhD at the University of Toronto, for his work on columnar jointing, and was recently a Fellow of Wolfson College, at the University of Cambridge. There he worked on the drying and cracking of colloidal films. His current research interests involve pattern formation, multi-phase flow, soft-matter physics, and geophysics.