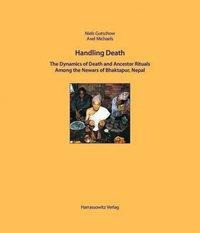 Handling Death
The Dynamics of Death Rituals and Ancestor Rituals Among the Newars of Bhaktapur, Nepal

In a rare combination of competence, an architectural historian (Niels Gutschow) and an indologist (Axel Michaels) have documented death rituals of the ethnic community of Newars in the Kathmandu Valley, Nepal. The first part of the book focusses to a specific setting, the ancient city of Bhaktapur and its calendric rituals of death and renewal. An introduction to the urban fabric with its cremation places, routes of death processions, places of spirits and ancestor deities is followed by a presentation of specialists involved in the death and ancestor rituals - illustrated by 28 maps. The second part presents a detailed description of the union of the deceased with his forefathers, a ritual which is also documented on a DVD. In addition, local handbooks and manuals used by the Brahmin priest during this ritual are edited and translated. This ethno-indological method of combination of textual and contextual approaches aims at understanding both the agency in rituals and the function of the text in contexts. Formalized rituals turn out to be by no means strict, stereotypical and unchangeable. The uniqueness of the actors, places and time has prompted the authors to name places and actors and to date time. The study of death rituals represents the first part of a trilogy of studies of life-cycle rituals in Nepal, carried out under the auspices of the Collaborative Research Centre "Dynamics of Ritual" (Sonderforschungsbereich 619: Ritualdynamik). von Gutschow, Niels