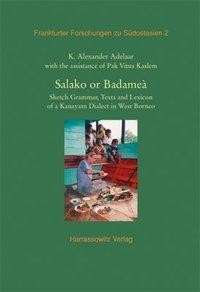 Salako or Badameà
Sketch Grammar, Text and Lexicon of a Kanayatn Dialect in West Borneo

Salako, or bahasa Badameà as it is often called, is spoken in the northwestern tip of Borneo on both sides of the Malaysian-Indonesian border running through this area. It is a dialect of Kanayatn (Kendayan), a major Dayak language and one of the principal languages of West Kalimantan Province (Indonesian Borneo). The present volume contains a short grammatical description of Salako as well as a lexicon and a body of texts with translation (consisting of folk stories and fairly detailed accounts of local traditions). von Adelaar, K Alexander