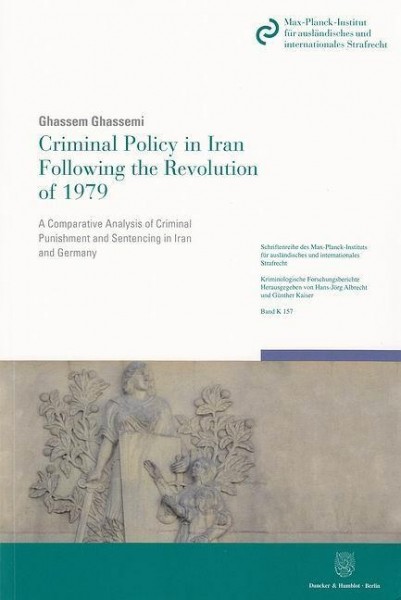 Criminal Policy in Iran Following the Revolution of 1979.
A Comparative Analysis of Criminal Punishment and Sentencing in Iran and Germany.

This study provides an overview of the development of criminal punishment in Iran. The changing relationship between Shari'a and modern forms of law is outlined and academic debates concerning the legitimate legal system are discussed. At the same time, the development of the criminal justice system in Germany from the 18th century onwards is assessed. History has shown that discussions on legitimate laws and criminal punishment have occurred in both Iran and Germany, though differences between the two cultures have meant that such discussions have often markedly diverged. These historical and cultural differences are reflected in the current criminal justice systems of both countries. This is illustrated in the study through a comparison of the various forms of punishment, legal institutions, and criminal policy lines of thinking. Following on from this, the attitudes of certain Iranian elites to criminal punishment - including topics such as Shari'a and human rights - are presented and analyzed. These attitudes were measured in 2008 by a survey conducted in four Iranian cities: Tehran, Qom, Ahwaz, and Sanandaj. Respondents were concerned directly or indirectly with the judicial system in Iran. They included police officers, prosecutors, judges, lawyers, law students and non-law students, Talabe (students in religious institutions in Qom), journalists, and members of political parties. Lastly, the outcomes of criminal punishment in Iran and Germany are compared and the results of the survey are summarized in order to provide a number of theoretical and analytical considerations. von Ghassemi, Ghassem

Ghassem Ghassemi was born in Sabzevar, Iran. From 1996 until 2001, he studied Law and Islamic Studies at Imam Sadiq University. He completed his Master of Laws in 2003 and began his doctoral studies in the same year at Shahid Beheshti University. In 2006, he relocated to the Max Planck Institute for Foreign and International Criminal Law in Freiburg, Germany. He was accepted as doctoral student of the institute's International Max Planck Research School on Comparative Criminal Law (IMPRS-CC) in January 2007 and completed his doctorate in May 2010.