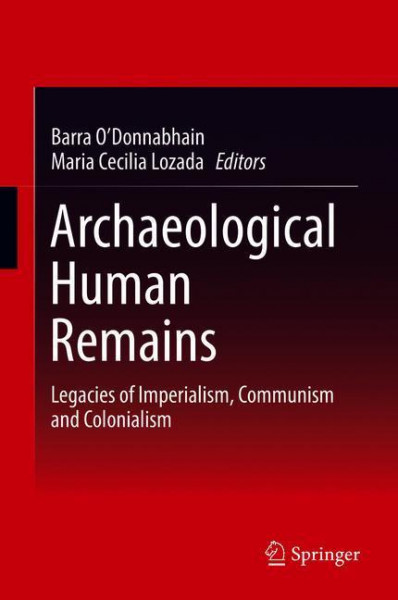 This book expands on Archaeological Human Remains: Global Perspectives that was published in the Springer Briefs series in 2014 and which had a strong focus on post-colonial countries. In the current volume, the editors include papers that deal with non-Anglophone European traditions such as Portugal, Germany and France. In addition, authors continue the exploration of osteological trajectories that are not well-documented in the West, such as Senegal, China and Russia. The lasting legacies of imperialism, communism and colonialism are apparent as the authors of the individual country profiles examine the historical roots of the study of archaeological human remains and the challenges encountered while also considering the likely future directions likely of this multi-faceted discipline in different world areas. von O'Donnabhain, Barra und Lozada, Maria Cecilia

Dr. Barra O'Donnabhain, who holds a PhD degree in Anthropology from the University of Chicago, is an Irish bioarchaeologist who has been conducting archaeological research in Ireland and other parts of the world over the last three decades. His publications cover a wide temporal span as well as a broad range of themes but are characterized by an integrative approach in their reconstructions of past lives. This is exemplified by recent papers dealing with the political use of the ritualized violence of public executions and the role of the quotidian use of material culture in the construction of identity in Viking Age Dublin. O'Donnabhain has directed and collaborated in archaeological projects in a number of world areas. His recent focus has been on institutional confinement. From 2009 to 2011, he directed excavations at a putative leper hospital in south west Ireland and since 2012 has been conducting excavations at the 19th century prison at Spike Island, also in Ireland. He is co-author of the 2016 volume "To Beautiful for Thieves and Pickpockets: A History of the Victorian Convict Prison on Spike Island". He is currently on the faculty of the Department of Archaeology at University College Cork and is on the Board of Directors of the Los Angeles-based Institute for Field Research. Dr. María Cecilia Lozada is a Peruvian bioarchaeologist who has been conducting archaeological research in the South Central Andes for the last 20 years, and holds a PhD degree in Anthropology from the University of Chicago. She uses a multidisciplinary approach to study the past, combining archaeology, human osteology and ethnohistory, which is exemplified in her book: "El Señorío de Chiribaya en la Costa Sur del Perú" (2002) and multiple publications that showcase her integrated social and biological reconstructions of past Andean societies. In 2013, she co-edited the volume "The Dead Tell Tales" that was published by the Cotsen Institute of Archaeology Press at UCLA. Along with Vera Tiesler, she is co-editor of the book Social Skins of the Head. Body Beliefs and Ritual in Ancient Mesoamerica and the Andes, University of New Mexico Press (2018). For the past 11 years, Lozada has been the main field archaeologist and human osteologist for several multidisciplinary and collaborative projects in northern Chile co-sponsored by the Cotsen Institute of Archaeology at UCLA and La Universidad de Chile. In 2009, she initiated a new archaeological project in the Vitor valley in southern Peru. As the Principal Investigator of the Vitor Archaeological Project, Lozada leads a multinational team that includes Peruvian investigators as well as numerous American students and researchers from institutions such as UCLA, the Field Museum of Natural History in Chicago and The University of Chicago. She is currently a Research Associate in the Department of Anthropology at the University of Chicago, and has been actively working to promote collaborations between local universities in Peru and the United States through her projects.