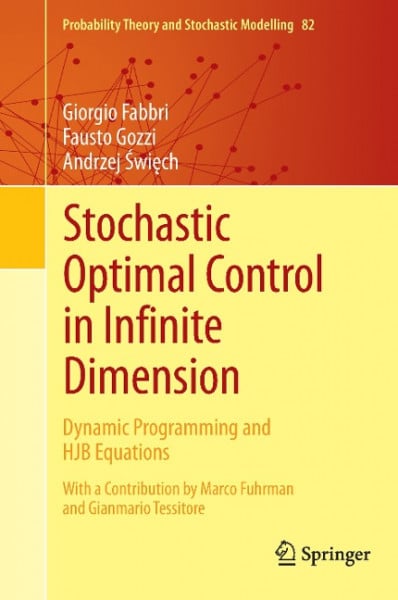 Providing an introduction to stochastic optimal control in in¿nite dimension, this book gives a complete account of the theory of second-order HJB equations in in¿nite-dimensional Hilbert spaces, focusing on its applicability to associated stochastic optimal control problems. It features a general introduction to optimal stochastic control, including basic results (e.g. the dynamic programming principle) with proofs, and provides examples of applications. A complete and up-to-date exposition of the existing theory of viscosity solutions and regular solutions of second-order HJB equations in Hilbert spaces is given, together with an extensive survey of other methods, with a full bibliography. In particular, Chapter 6, written by M. Fuhrman and G. Tessitore, surveys the theory of regular solutions of HJB equations arising in in¿nite-dimensional stochastic control, via BSDEs. The book is of interest to both pure and applied researchers working in the control theory of stochastic PDEs, and in PDEs in in¿nite dimension. Readers from other ¿elds who want to learn the basic theory will also ¿nd it useful. The prerequisites are: standard functional analysis, the theory of semigroups of operators and its use in the study of PDEs, some knowledge of the dynamic programming approach to stochastic optimal control problems in ¿nite dimension, and the basics of stochastic analysis and stochastic equations in in¿nite-dimensional spaces. von Fabbri, Giorgio und Gozzi, Fausto und Swiech, Andrzej

Giorgio Fabbri is a CNRS Researcher at the Aix-Marseille School of Economics, Marseille, France. He works on optimal control of deterministic and stochastic systems, notably in infinite dimensions, with applications to economics. He has also published various papers in several economic areas, in particular in growth theory and development economics. Fausto Gozzi is a Full Professor of Mathematics for Economics and Finance at Luiss University, Roma, Italy. His main research field is the optimal control of finite and infinite-dimensional systems and its economic and financial applications. He is the author of many papers in various subjects areas, from Mathematics, to Economics and Finance.Andrzej Swiech is a Full Professor at the School of Mathematics, Georgia Institute of Technology, Atlanta, USA. He received Ph.D. from UCSB in 1993. His main research interests are in nonlinear PDEs and integro-PDEs, PDEs in infinite dimensional spaces, viscosity solutions, stochastic and deterministic optimal control, stochastic PDEs, differential games, mean-field games, and the calculus of variations. *Marco Fuhrman* is a Full Professor of Probability and Mathematical Statistics at the University of Milano, Italy. His main research topics are stochastic di¿erential equations in in¿nite dimensions and backward stochastic di¿erential equations for optimal control of stochastic processes. *Gianmario Tessitore* is a Full Professor of Probability and Mathematical Statistics at Milano-Bicocca University. He is the author of several scienti¿c papers on control of stochastic di¿erential equations in ¿nite and in¿nite dimensions. He is, in particular, interested in the applications of backward stochastic di¿erential equations in stochastic control.