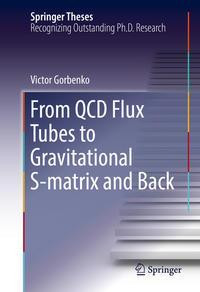 From QCD Flux Tubes to Gravitational S-matrix and Back

From QCD Flux Tubes to Gravitational S-matrix and Back

This thesis studies various aspects of non-critical strings both as an example of a non-trivial and solvable model of quantum gravity and as a consistent approximation to the confining flux tube in quantum chromodynamics (QCD). It proposes and develops a new technique for calculating the finite volume spectrum of confining flux tubes. This technique is based on approximate integrability and it played a game-changing role in the study of confining strings. Previously, a theoretical interpretation of available high quality lattice data was impossible, because the conventional perturbative expansion for calculating the string spectra was badly asymptotically diverging in the regime accessible on the lattice. With the new approach, energy levels can be calculated for much shorter flux tubes than was previously possible, allowing for a quantitative comparison with existing lattice data. The improved theoretical control makes it manifest that existing lattice data provides strong evidence for a new pseudoscalar particle localized on the QCD fluxtube - the worldsheet axion. The new technique paves a novel and promising path towards understanding the dynamics of quark confinement. von Gorbenko, Victor

Dr Victor Gorbenko was awarded the PhD degree by New York University in 2015, and is currently with the Physics Department at Stanford University.