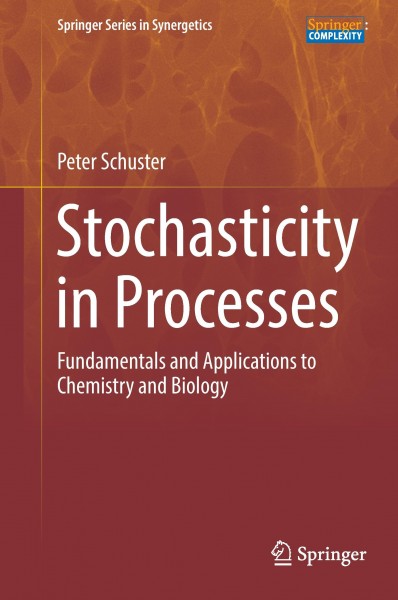 Stochasticity in Processes
Fundamentals and Applications to Chemistry and Biology

This book has developed over the past fifteen years from a modern course on stochastic chemical kinetics for graduate students in physics, chemistry and biology. The first part presents a systematic collection of the mathematical background material needed to understand probability, statistics, and stochastic processes as a prerequisite for the increasingly challenging practical applications in chemistry and the life sciences examined in the second part.Recent advances in the development of new techniques and in the resolution of conventional experiments at nano-scales have been tremendous: today molecular spectroscopy can provide insights into processes down to scales at which current theories at the interface of physics, chemistry and the life sciences cannot be successful without a firm grasp of randomness and its sources. Routinely measured data is now sufficiently accurate to allow the direct recording of fluctuations. As a result, the sampling of data and the modeling of relevant processes are doomed to produce artifacts in interpretation unless the observer has a solid background in the mathematics of limited reproducibility.The material covered is presented in a modular approach, allowing more advanced sections to be skipped if the reader is primarily interested in applications. At the same time, most derivations of analytical solutions for the selected examples are provided in full length to guide more advanced readers in their attempts to derive solutions on their own. The book employs uniform notation throughout, and a glossary has been added to define the most important notions discussed. von Schuster, Peter

Peter Schuster, born 07.03.1941, received his Ph.D. (sub auspiciis praesidentis) in Chemistry and Physics from the University of Vienna in 1967. His professional career includes: Postdoctoral assistant with Prof. Manfred Eigen at the Max Planck Institute of Physical Chemistry in Göttingen, Germany, 1968-1969, Habilitation in Theoretical Chemistry at the "Universität Wien", 1971, Full professor of Theoretical Chemistry at the "Universität Wien", 1973-2009, Head of the Institute of Theoretical Chemistry at the Universität Wien, 1973-1992 and 1996-2010, External Faculty member of the Santa Fe Institute, Santa Fe, USA, 1991-2003 and 2004-2013, and External Professor emeritus of this institute, since 2013, Founding director of the Institute of Molecular Biotechnology in Jena, Germany, 1992-1995, Member of the Austrian Academy of Sciences, since 1984. He was Vice-President of this academy in the years 2000 - 2003 and President 2006-2009, Member of the "Deutsche Akademie der Naturforscher Leopoldina, Nationale Akademie der Wissenschaften", since 1993. He was member of the Presiding Committee of this academy in the years 2001-2006, Foreign Associate of the National Academy of Sciences USA, since 2009 Member of the Academia Europaea, London, since 2009 Member of the European Molecular Biology Organization (EMBO), since 2014 Professor emeritus of the "Universität Wien", since 2009. Peter Schuster is a member of the Springer Complexity and Synergetics editorial boards and has been Editor-in-Chief of the journal "Complexity", 2001-2016.