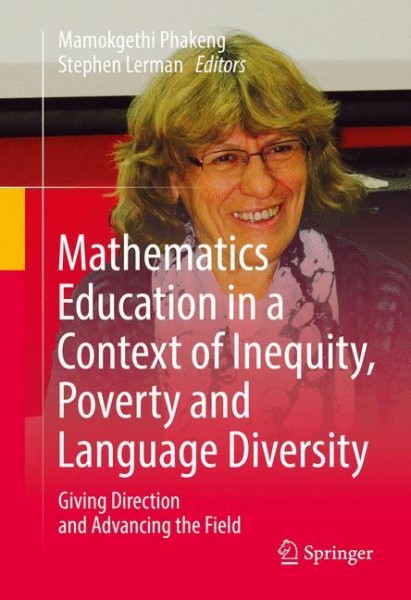 Mathematics Education in a Context of Inequity, Poverty and Language Diversity

Mathematics Education in a Context of Inequity, Poverty and Language Diversity
Giving Direction and Advancing the Field

This volume is dedicated to the career of Jill Adler and the role she has played in growing mathematics education research in South Africa, Africa and beyond. Her work epitomises what is referred to as the 'engaged scholar': i.e. doing rigorous and theoretically rich research at the cutting edge of international work in the field which at the same time contributes to critical areas of local and regional need in education. Jill is one of the world's leading experts in mathematics education research and her exemplary career is a continuous source of inspiration for generations of researchers and students. The chapters in this volume are authored by Jill's former PhD students, a few select colleagues from different parts of the world that she collaborated with as well as leading scholars who she worked with in PME, ICMI and in her many international assignments. In essence, this volume celebrates Jill's contribution not only to mathematics education but also to our contributions as her friends and colleagues. Topics covered include language and mathematics, teacher education, and the dilemma of an activist researcher engaging in issues that matter hugely to the participants in the research, students and teachers in post-apartheid schooling, whilst also setting up the separation that is needed for good research. von Phakeng, Mamokgethi und Lerman, Stephe

Mamokgethi Phakeng (formerly Setati) is full professor and Vice Principal of Research and Innovation at Unisa. She holds a PhD in Mathematics Education from the University of the Witwatersrand. She is a B2 NRF-rated scientist and has been invited as a speaker and visiting professor at international conferences and universities in Australia, Botswana, Canada, Denmark, Finland, India, Italy, Kenya, Lesotho, Mexico, Mozambique, Namibia, New Zealand, Pakistan, Senegal, South Korea, Sweden, Switzerland, UK and USA. She has won several awards for her research and community work, the latest being the 2014 CEO magazine award for being the most influential woman in education and training (Academic) in Africa and the 2011 NSTF award for being the most outstanding Senior Black Female Researcher over the last 5 to 10 years in recognition of her innovative, quality research on teaching and learning mathematics in multilingual classrooms. Prof Phakeng was elected as a member of the Academy of Science of South Africa (ASSAf) in November 2007; an honorary member of the Golden Key International Honour Society in May 2009 and an honorary life member of the Association for Mathematics Education of South Africa (AMESA) in July 2009. In 2008 she became the first South African black researcher to be appointed to co-chair a study commissioned by the International Commission on Mathematical Instruction. The study is entitled "mathematics and language diversity" and it is currently in its final stages of publishing an edited volume. She is President of Convocation of Wits University, trustee of the FirstRand Foundation and member of the board of the CSIR. She has served as national president of the Association for Mathematics Education of South Africa (AMESA) from 2002 to 2006, chairperson of the Board of the South African Mathematics Foundation (SAMF) from 2005 to 2006 and secretary and member of the executive committee of the International Group for the Psychology of Mathematics Education (PME) from 2003 to 2007. She is the founder of the Adopt-a-learner Foundation (www.adopt-a-learner.com), a non-profit organisation that started in 2004 and provides financial and educational support to students from township and rural areas to acquire higher education qualifications. Stephen Lerman was a schoolteacher of mathematics before completing a PhD and becoming a teacher educator and a researcher in mathematics education. He has worked at London South Bank University since 1987 and was promoted to a Chair in 1998. He was Chair of the British Society for Research into Learning Mathematics from March 1994 to December 1996, and President of the International Group for the Psychology of Mathematics Education from July 1995 to July 1998. Prof. Lerman's research focus has been on sociocultural and sociological perspectives on the teaching and learning of mathematics. Amongst many minor grants for research he was Principal Investigator on an ESRC funded research project from 2001 to 2003 entitled "The Production and Use of Theories of Teaching and Learning Mathematics", and co-Principle Investigator on a European funded research project entitled "Big Ideas in the Teaching and Learning of Mathematics" from 2009 to 2011. He was recipient of the Svend Pederson Award from Stockholm University in 2010. In 2014, he was honoured with the publication of a book edited by Peter Gates and Robyn Jorgensen entitled "Shifts in the field of mathematics education: Stephen Lerman and the turn to the social", published by Springer. He is Visiting Fellow in the Mathematics Education Centre at Loughborough University, Visiting Professor at the Faculty of Education of the University of the Witwatersrand in Johannesburg, South Africa, and Adjunct Professor at Griffith Institute for Educational Research in Brisbane, Australia. He was appointed Emeritus Professor of Mathematics Education on retirement in 2012.