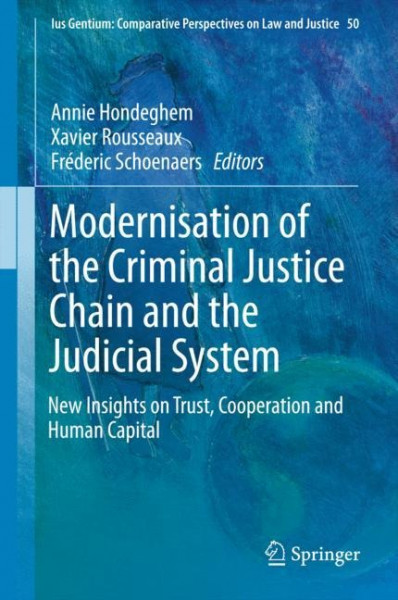 Modernisation of the Criminal Justice Chain and the Judicial System

Modernisation of the Criminal Justice Chain and the Judicial System
New Insights on Trust, Cooperation and Human Capital

This book focuses on one part of the judicial system: the criminal justice chain. This involves all the activities and actors dealing with policing, prosecution, judgment, and sanctioning of crimes. In the last decades, reforms have been implemented in several European countries. In Belgium, for example, there was the so-called Octopus reform in 1998. The police was restructured, leading to an integration of the police forces on a national and local level. New steering instruments were introduced, such as regional security plans. With regard to the sanctioning of crimes, a new institution was installed, called the sentence implementation court. This book evaluates these reforms and discusses the current reform on the reorganization of the judicial landscape. In addition, it examines the relation between trust and distrust and the application to the judicial system. It discusses the human capital aspect of the system, by means of a study on the prosopography of the Belgian magistrates that analyses the Magistracy as socio-professional group, and focuses on situations of system building, transformations under constraint (occupations), and transfers (colonial experience). Lastly, the book presents a comparative study of Belgium and France regarding the new techniques and instruments that are needed to accelerate the judicial response time and to ensure that the judicial system delivers its services on time. von Hondeghem, Annie und Rousseaux, Xavier und Schoenaers, Fréderic