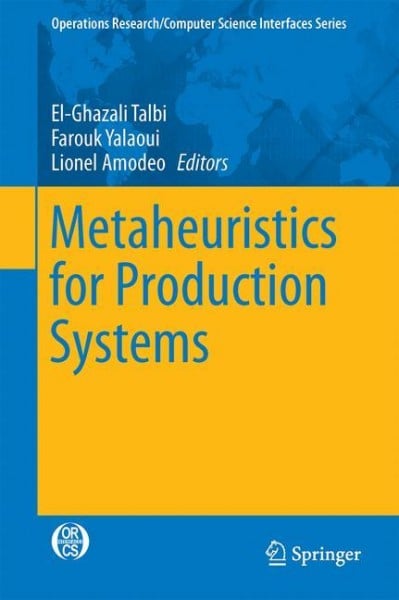 This book discusses the main techniques and newest trends to manage and optimize the production and service systems. The book begins by examining the three main levels of decision systems in production: the long term (strategic), the middle term (tactical) and short term (operational). It also considers online management as a new level (a sub level of the short term). As each level encounters specific problems, appropriate approaches to deal with these are introduced and explained. These problems include the line design, the line balancing optimization, the physical layout of the production or service system, the forecasting optimization, the inventory management, the scheduling etc.Metaheuristics for Production Systems then explores logistic optimization from two different perspectives: internal (production management), addressing issues of scheduling, layout and line designs, and external (supply chain management) focusing on transportation optimization, supply chain evaluation, and location of production. The book also looks at NP-hard problems that are common in production management. These complex configurations may mean that optimal solutions may not be reached due to variables, but the authors help provide a good solution for such problems. The effective new results and solutions offered in this book should appeal to researchers, managers, and engineers in the production and service industries. von Talbi, El-Ghazali und Yalaoui, Farouk und Amodeo, Lionel

Prof. El-Ghazali Talbi received the Master and Ph.D degrees in Computer Science, both from the Institut National Polytechnique de Grenoble in France. Then he became an Associate Professor in Computer Sciences at the University of Lille (France). Since 2001, he is a full Professor at the University of Lille and the head of the optimization group of the Computer Science laboratory (CRISTAL). His current research interests are in the field of multi-objective optimization, parallel algorithms, metaheuristics, combinatorial optimization, cluster and grid computing, hybrid and cooperative optimization, and application to logistics/transportation, bioinformatics and networking.Professor Talbi has to his credit more than 300 publications in journals, chapters in books, and conferences. He is the co-editor of five books. He was a guest editor of more than 10 special issues in different journals (Journal of Heuristics, Journal of Parallel and Distributed Computing, European Journal of Operational Research, Theoretical Computer Science, Journal of Global Optimization). He is the head of the INRIA Dolphin project and the bioinformatics platform of the Genopole of Lille. He has many collaborative industrial, European and international projects. He is the co-founder and the coordinator of the research group dedicated to Metaheuristics: Theory and Applications (META). He is the founding co-chair of the NIDISC workshop on nature inspired computing (IEEE/ACM IPDPS). He served in different capacities on the programs of more than 100 national and international conferences. He was also the conference chair of many conferences (e.g. EA'2005, ROADEF'2006, META'2008, IEEE AICCSA'2010, MIC'2015).Farouk Yalaoui obtained his Engineering degree in Industrial Engineering from the Polytechnics School of Algiers (Algeria) in 1995, his master's degree in Industrial System Engineering from Polytechnics Institute of Lorraine (Nancy, France) in 1997, his Ph.D. degree in Production Management from the Troyes University of Technology (UTT) in 2000 and followed by a Habilitation à diriger les recherches (Dr. Hab) from Compiegne University of Technology (UTC) in 2006. He is currently a full Professor at Troyes University of Technology, France, where he is the head of Optimisation Industrial systems Optimisation Lab (Research Team), Charles Dealaunay Institute (ICD), UMR CNRS 6281. His research topic focuses on the scheduling problems, system design, operations research, modeling, analysis and optimization of logistic and production systems, reliability and maintenance optimization and on optimization problems in general. He is author or co-author of a pattern and more than 330 contributions, publications or communications with 1 patent; 3 books (Ellipses, Hermes-Lavoisier, Willey and Sons), 9 book chapters and 60 papers in journals such as IIE Transactions, European Journal of Operational research, International Journal of Production Economics, IEEE Transactions on Reliability, Reliability Engineering and System Safety, Computer & Operations research, Journal of Intelligent Manufacturing. He also published more than 230 papers in conference proceedings. He had presented 19 invited speeches (seminaries or conferences plenary sessions).He is member of editor board of the book series "Automation and Control - Industrial Engineering", ISTE Wiley, London, since 2014. He is also member of several international conference committees (about 83 conferences) (INCOM2015, IESM 2015, MIC'2015,), member more than 25 organization committees of conferences. He served or serves as editor to 15 International journal Boards: The Scientific World Journal as part of the journal's Operations Research subject area (TSWJ), International journal of Supply and Operations Management (IJSOM), British Journal of Mathematics &computer Science (BJMCS), Journal of Risk Analysis and Crises Response (JRACR). He served as guest editor for Journal special issue (Journal of Multiple Valued Logic and Soft Computing, Journal of Intelligent Manufacturing). He organized and or Chair more than 79 tracks or sessions in conference. He is reviewer for more than 36 international journals.He is Vice Chair of IFAC TC group 5.2. He is Chair of a Working Group on multi objective optimization. He is member of French Universities National Council (CNU) field Automation, Control, Industrial Engineering (section 61). http://losi.utt.fr/fr/membres/yalaoui.html..  He is member and expert for French ANR agency, and for different agency such French AERES Agency, Natural Sciences and Engineering Research Council of Canada (NSERC), Algerian PNR program.Lionel Amodeo obtained his Engineering Degree in Mechanical Engineering from the National Engineer School of Belfort (France) in 1993, and the same year, his master's degree in Automatic and Production Management from the University of Franche Comté (France). In 1999, he received his Ph.D. degree in Automatic and Computer Sciences from the University of Franche Comté (France). Then he became an Associated Professor at the University of Technology of Troyes (UTT) in 2000. Since 2010, he is a full Professor at UTT, where he is the head of the Engineer Degree in Industrial Systems with more than 400 students. His research interests include logistic and production systems optimization, scheduling, system design, facility layout and inventory problems.He has published more than 240 contributions including 3 books, 10 book chapters, 34 papers in international journals and over 190 communications in conference proceedings. He is member of Editorial Board of journals: International Journal of Engineering Mathematics, Hindawi Publishing Corporation, Journal of Modelling and Simulation of Systems (www.hypersciences.org), Journal of Studies on Manufacturing (www.hypersciences.org). He is also member of several international conference committees (about 20 conferences) (INCOM2015, IESM 2015, MIC'2015,), member of more than 15 organization committees of conferences. He organized and or Chair more than 26 tracks or sessions in conferences. He is reviewer for more than 18 international journals. He supervises or supervised 15 Ph.D thesis and 32 Master of Sc. Student. He is expert for French Research Agency (ANR), and for different agencies such as French AERES Agency, Natural Sciences and Technology Research Fund (FRQNT, Canada), and Austrian Research Fund (FWF).He is member of the Technical Committee IFAC T.7.4 Transportation Systems.