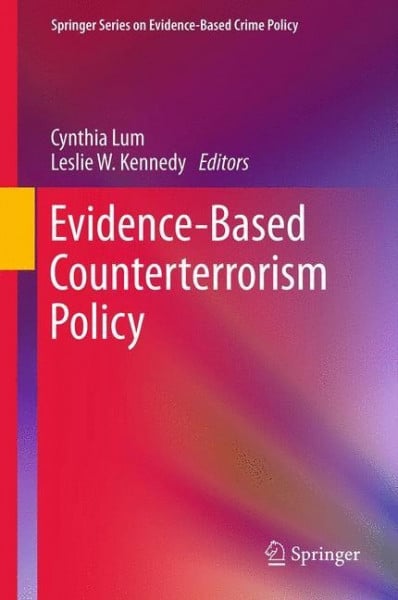 In the past eight years, there has been a massive increase in government spending on counterterrorism intervention development and implementation. Given this increase, there are two evidence-based policy questions that are important to address: Is there evidence that any of these programs are effective - in other words, can they be shown to be linked to reducing terrorism, terrorist recruiting, or to improving the response and management of terrorist events? Do these interventions have secondary or collateral effects that may be costly, harmful, illegal, beneficial, or otherwise? As Lum and Kennedy discovered in an evaluation research on counterterrorism interventions, only a minuscule number of empirical studies of terrorism exist and there is an almost complete absence of evaluation research on counter-terrorism strategies. This is startling given the enormous increases in the development and use of counter-terrorism programs, as well as spending on counter-terrorism activity. Even more disconcerting was the nature of the evaluations we did find; some programs were shown to either have no discernible effect on terrorism or lead to increases in terrorism. The emphasis of the need for empirical research in evaluating interventions and informing policy cannot be overstated, and is the primary goal of Evidence-Based Counterterrorism Policy. von Lum, Cynthia und Kennedy, Leslie W.

Cynthia Lum researches in the area of crime prevention, international and domestic policing concerns, democratization and justice, place-based criminology, and research methodology. She has consulted with numerous police agencies in the areas of deployment and crime analysis both in the United States and abroad and also works with the U.S. State Department's International Law Enforcement Academy, where she helps train police commanders from multiple nations. Her recent projects include developing protocols and technologies for tip lines in high-intensity events (funded by the Department of Defense/Department of Justice), conducting a multi-language survey of law enforcement officials across thirty nations, empirically testing social disorganization theory, and conducting a systematic review of research evaluating anti-terrorism strategies. Leslie W. Kennedy, a Professor at Rutgers University, served as Dean of the Rutgers School of Criminal Justice from 1998 to 2007. Dr. Kennedy has published extensively in the areas of fear of crime, victimology, and violence. His current research in public security builds upon his previous work in event analysis and understanding the social contexts in which dangers in society are identified and deterred. Dr. Kennedy is also the Director of the Rutgers Center for the Study of Public Security.