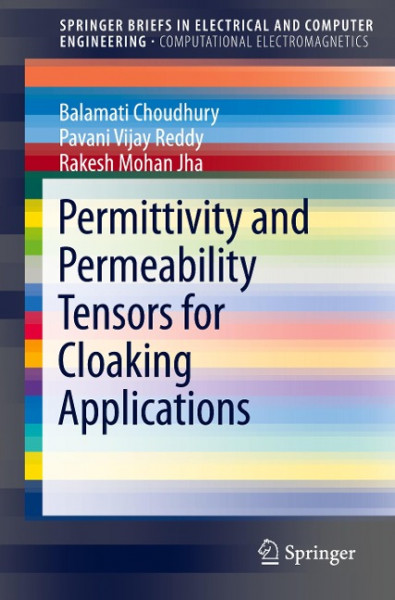 This book is focused on derivations of analytical expressions for stealth and cloaking applications. An optimal version of electromagnetic (EM) stealth is the design of invisibility cloak of arbitrary shapes in which the EM waves can be controlled within the cloaking shell by introducing a prescribed spatial variation in the constitutive parameters. The promising challenge in design of invisibility cloaks lies in the determination of permittivity and permeability tensors for all the layers. This book provides the detailed derivation of analytical expressions of the permittivity and permeability tensors for various quadric surfaces within the eleven Eisenhart co-ordinate systems. These include the cylinders and the surfaces of revolutions. The analytical modeling and spatial metric for each of these surfaces are provided along with their tensors. This mathematical formulation will help the EM designers to analyze and design of various quadratics and their hybrids, which can eventually lead to design of cloaking shells of arbitrary shapes. von Choudhury, Balamati und Reddy, Pavani Vijay und Jha, Rakesh Moha

Dr. Balamati Choudhury is currently working as a Scientist at Centre for Electromagnetics of CSIR-National Aerospace Laboratories, Bangalore, India since April 2008. She obtained her M.Tech. (ECE) degree in 2006 and Ph.D. (Engg.) degree in Microwave Engineering from Biju Patnaik University of Technology (BPUT), Rourkela, Orissa, India in 2013. During the period of 2006-2008, she was a Senior Lecturer in Department of Electronics and Communication at NIST, Orissa India. Her active areas of research interests are in the domain of soft computing techniques in electromagnetics, computational electromagnetics for aerospace applications and metamaterial design applications. She was also the recipient of the CSIR-NAL Young Scientist Award for the year 2013-2014 for her contribution in the area of Computational Electromagnetics for Aerospace Applications. She has authored or co-authored over 100 scientific research papers and technical reports including a book and three book chapters. Dr. Balamati is also an Assistant Professor of AcSIR, New Delhi.Ms. Pavani Vijay Reddy is currently working as Project Assistant at Center for Electromagnetics (CEM), CSIR-NAL, Bangalore. She obtained her B.Tech. degree from Jawaharlal Nehru Technical University, Kakinada, and is working on conformal antennas, metamaterials, invisibility cloaking, etc.Dr. Rakesh Mohan Jha was Chief Scientist & Head, Centre for Electromagnetics, CSIR-National Aero space Laboratories, Bangalore. Dr. Jha obtained a dual degree in BE (Hons.) EEE and MSc (Hons.) Physics from BITS, Pilani (Raj.) India, in 1982. He obtained his Ph.D. (Engg.) degree from Department of Aerospace Engineering of Indian Institute of Science, Bangalore in 1989, in the area of computational electromagnetics for aerospace applications. Dr. Jha was a SERC (UK) Visiting Post-Doctoral Research Fellow at University of Oxford, Department of Engineering Science in 1991. He worked as an Alexander von Humboldt Fellow at the Institute for High-Frequency Techniques and Electronics of the University of Karlsruhe, Germany (1992-1993, 1997). He was awarded the Sir C.V. Raman Award for Aerospace Engineering for the Year 1999. Dr. Jha was elected Fellow of INAE in 2010, for his contributions to the EM Applications to Aerospace Engineering. He was also the Fellow of IETE and Distinguished Fellow of ICCES. Dr. Jha has authored or co-authored several books, and more than five hundred scientific research papers and technical reports. He passed away during the production of this book of a cardiac arrest.