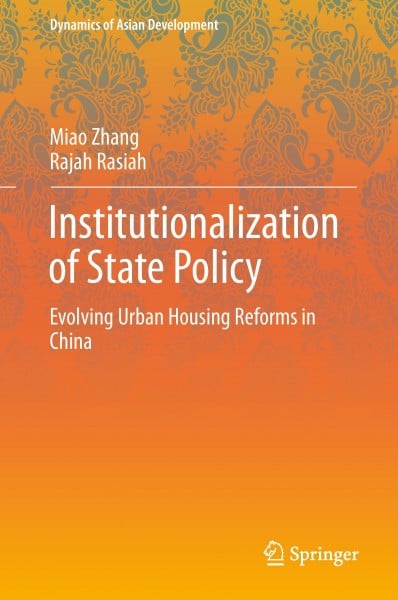 Using fresh evidence and a novel methodological framework, this book sheds light on how institutions have driven economic reform in China's urban housing sector. The book systematically analyzes the developmental role of the state in China, with rich empirical evidence to show how decentralization has brought about significant participation by the different levels of government with the central, provincial and municipal governments focusing on initiation, intermediation and implementation roles respectively. Despite many Western analysts claiming that it is single complex superstructure, the institutionalization of governance structures in China following reforms has taken place through strong coordination between governments at different levels to meet targeted plans. Although China still has a long way to go to before it can be considered developed, this book elaborates on how the country offers a unique alternative for other states seeking to develop by striking a balance between capitalist and socialist instruments. von Zhang, Miao und Rasiah, Rajah

Zhang Miao is Visiting Research Fellow at Institute of China Studies, University of Malaya. She obtained her PhD. in Economics from University of Malaya in 2014. Her research focuses on institutional economics and state theory. Her research interest includes urban housing policy, institution and governance, as well as civil society of China. Her research spectrum also extends to the fields of industrial policy and technology innovation. Her previous writings have appeared in international journals such as Journal of Contemporary Asia, Habitat International, Cities, Journal of Asia Pacific Economy and Asia Pacific Business Review. She has undertaken consultancies for international agencies, including United Nations Development Programme (UNDP) and the Economic Research Institute for ASEAN and East Asia (ERIA) and research projects funded by grants on the development of China's urban housing sector.Rajah Rasiah is Professor of Technology and Innovation Policy, Faculty of Economics and Administration at the University of Malaya in Malaysia. He received his doctorate (economics) from Cambridge University, England in 1992, the same year he became a lecturer at the National University of Malaysia before being appointed as a Professor of Industrial Organization in 1998. Between 2001 and 2004 he served as a Senior Researcher at UNU-INTECH (now UNU-MERIT) where he was also Head of Publications. He has undertaken consultancies and research projects for many international agencies, including the United Nations Conference for Trade and Development (UNCTAD), United Nations Industrial Development Organization (UNIDO), International Labour Organization (ILO), World Bank, United Nations Educational, Scientific and Cultural Organization (UNESCO) and the Asian Development Bank (ADB). He has published over 250 works in international journals and presses. Among the prizes he has received include the prestigious Celso Furtado Prize in Social Sciences in 2014 for his seminal contributions in the field technology and economic development.