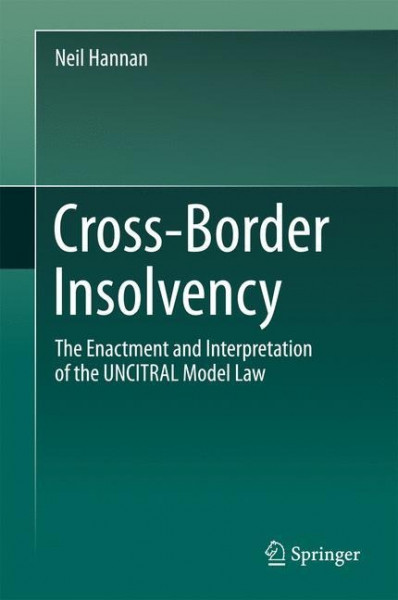 This book examines the effect of the adoption of the United Nations Committee on International Trade Law (UNCITRAL) Model Law on Cross-Border Insolvency in five common law jurisdictions, namely Australia, Canada, New Zealand, the United Kingdom, and the United States of America. It examines how each of those states has adopted, interpreted and applied the provisions of the Model Law, and highlights the effects of inconsistencies by examining jurisprudence in each of these countries, specifically how the Model Law affects existing principles of recognition of insolvency proceedings.The book examines how the UNCITRAL Guide to enactment of the Model Law has affected the interpretation of each of its articles and, in turn, the courts' ability to interpret and hence give effect to the purposes of the Model Law. It also considers the ability of courts to refer to amendments made to the Guide after enactment of the Model Law in a state, thereby questioning whether the current inconsistencies in interpretation can be overcome by UNCITRAL amending the Guide. von Hannan, Neil

Neil Hannan is a partner at Thomson Geer in Melbourne, Australia, whose area of practice is insolvency, specifically cross-border insolvencies. His experience includes commercial litigation, banking and finance, insurance, insolvency, directors' and officers' claims, and claims under the Competition and Consumer Act and the Corporations Act. He regularly appears in the Supreme and Federal Courts and on behalf of clients, including leading financial institutions, accountants, and corporate entities operating in both local and international markets.