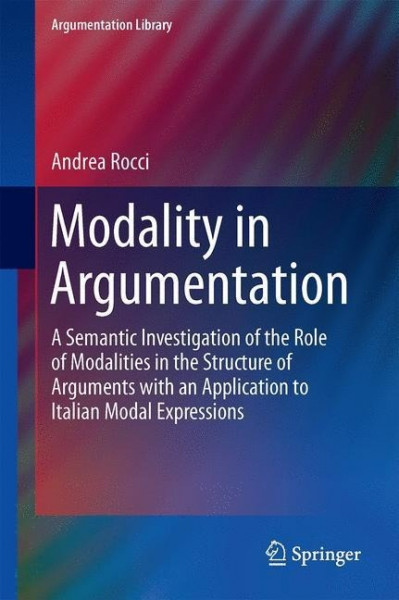 This book addresses two related questions that have first arisen in Toulmin's seminal book on the uses of argument. The first question is the one of the relationship between the semantic analysis of modality and the structure of arguments. The second question is the one of the distinctive place, or role, of modality in the fundamental structure of arguments. These two questions concern how modality, as a semantic category, relates to the fundamental structure of arguments. The book addresses modality and argumentation also according to another perspective by looking at how different linguistic modal expressions may be taken as argumentative indicators. It explores the role of modal expressions as argumentative indicators by using the Italian modal system as a case study. At the same time, it uses predictions/forecasts in the business-financial daily press to investigate the relation between modality and the context of argumentation. von Rocci, Andrea

Andrea Rocci is Associate Professor and Director of the Institute of Argumentation, Linguistics and Semiotics at the Università della Svizzera italiana (Lugano). He is also Director of the Master programme in Financial Communication offered jointly by the faculties of Economics and Communication Sciences at the same university. He has published extensively in the fields of argumentation, pragmatics, semantics and discourse analysis. He is co-author (with Marcel Danesi) of a textbook on Global linguistics. He has directed / is directing several projects on argumentation in the contexts of journalism, corporate communication and financial communication funded by the Swiss National Science Foundation (SNSF).