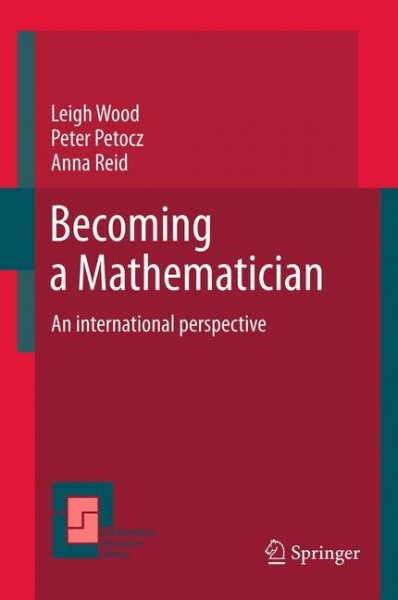 Becoming a Mathematician
An international perspective

This book considers the views of participants in the process of becoming a mathematician, that is, the students and the graduates. This book investigates the people who carry out mathematics rather than the topics of mathematics. Learning is about change in a person, the development of an identity and ways of interacting with the world. It investigates more generally the development of mathematical scientists for a variety of workplaces, and includes the experiences of those who were not successful in the transition to the workplace as mathematicians. The research presented is based on interviews, observations and surveys of students and graduates as they are finding their identity as a mathematician. The book contains material from the research carried out in South Africa, Northern Ireland, Canada and Brunei as well as Australia. von Wood, Leigh N. und Petocz, Peter und Reid, Anna

Leigh Wood is Associate Professor and Associate Dean of Learning and Teaching in the Faculty of Business and Economics at Macquarie University, Sydney, responsible for curriculum development for over 15 000 students. Previously she was Director of the Mathematics Study Centre at the University of Technology, Sydney, where she taught a range of mathematics courses to students from many backgrounds. She has had a distinguished career in the field of mathematics education, having published several textbooks and many articles and book chapters in areas including innovative pedagogy, assessment practices, curriculum development and equity issues in mathematics. She has been invited as keynote speaker at several mathematics education conferences, including the ICME and Delta series, and has been invited to write about the non-Western mathematics and the state of Australian research in mathematics education.  Peter Petocz is Associate Professor in the Department of Statistics at Macquarie University, Sydney. As well as working as a professional applied statistician, he has a long-standing interest in mathematics and statistics pedagogy, both in practical terms and as a research field. He is the author of a range of learning materials, textbooks, video packages and computer-based materials. Peter has been undertaking research in a range of disciplines including statistics and mathematics, investigating students' and teachers' conceptions of their discipline and learning, the development of professional dispositions such as sustainability and ethics, and the move from tertiary study to the professional world. His expertise in qualitative research approaches combines fruitfully with qualitative approaches for exploring learning and teaching in higher education. Anna Reid is Professor and Associate Dean of Learning and Teaching at the Sydney Conservatorium of Music, a faculty of The University of Sydney. Anna is an expert in qualitative research approaches, particularly as applied to learning and teaching in higher education. Her research has explored the relationships between students' and teachers' understanding of learning and professional work in a wide diversity of disciplines including music, mathematics and statistics. She has published and edited several research monographs, in areas including internationalisation and professional formation. Anna's current research focuses on creativity and sustainability for professional formation, the curriculum implications of internationalisation, and the development of engagement and identity for professional formation.