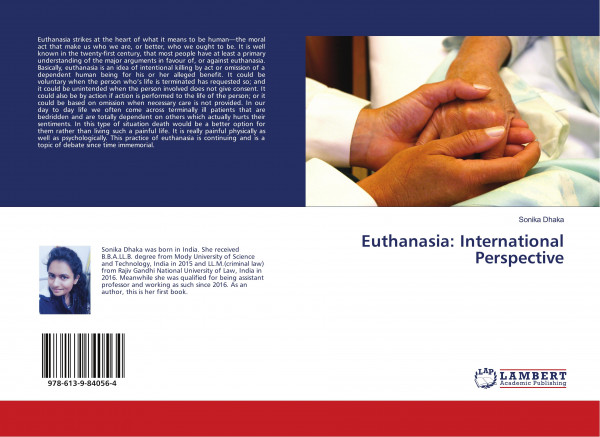 Euthanasia strikes at the heart of what it means to be human-the moral act that make us who we are, or better, who we ought to be. It is well known in the twenty-first century, that most people have at least a primary understanding of the major arguments in favour of, or against euthanasia. Basically, euthanasia is an idea of intentional killing by act or omission of a dependent human being for his or her alleged benefit. It could be voluntary when the person who's life is terminated has requested so; and it could be unintended when the person involved does not give consent. It could also be by action if action is performed to the life of the person; or it could be based on omission when necessary care is not provided. In our day to day life we often come across terminally ill patients that are bedridden and are totally dependent on others which actually hurts their sentiments. In this type of situation death would be a better option for them rather than living such a painful life. It is really painful physically as well as psychologically. This practice of euthanasia is continuing and is a topic of debate since time immemorial. von Dhaka, Sonika

Sonika Dhaka was born in India. She received B.B.A.LL.B. degree from Mody University of Science and Technology, India in 2015 and LL.M.(criminal law) from Rajiv Gandhi National University of Law, India in 2016.Meanwhile she was qualified for being assistant professor and working as such since 2016. As an author, this is her first book.