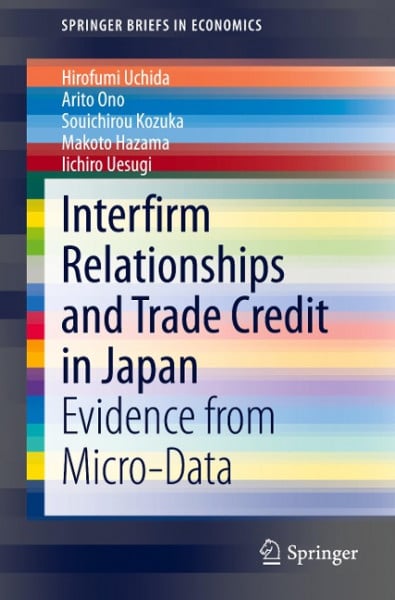 Interfirm Relationships and Trade Credit in Japan
Evidence from Micro-Data

This is the first book to report the details of the current status of interfirm relationships in Japan. Based on a unique data set of firms, the authors describe the characteristics of interfirm transactions in a manner unprecedented in the literature. Special emphasis is placed on the nature of payment/collection between firms. Payment for interfirm transactions is usually made on account, or by payment after delivery, rather than by immediate payment. Thus, most interfirm transactions are accompanied by a provision of credit (i.e., lending/borrowing) from a seller to a buyer, referred to as trade credit. Although trade credit is used all around the world and accounts for a large portion of firms' balance sheets, researchers, lacking detailed data, have long encountered serious difficulty in clarifying how and why firms use trade credit.In this work the authors use a huge, unique data set of about 380,000 firms in Japan during the 2007-2010 period. To grasp the entirety of this enormous data set, which is tantamount to a picture of all firms currently operating in Japan, this brief summarizes descriptive statistics and conducts univariate analyses of the data. Also provided is the legal background of trade credit practice in Japan from the "law and economics" perspective. In this manner, the book furnishes vital information that can be used as a reference for future theoretical and empirical analyses of trade credit and interfirm relationships. von Uchida, Hirofumi und Ono, Arito und Uesugi, Iichiro und Hazama, Makoto und Kozuka, Souichiro