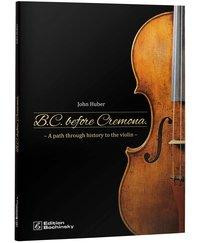 B.C. Before Cremona
A path through history to the violin

Based upon the physical resources of our bodies and our environment, music has been part of our history during the entire development of our civilization. From our earliest efforts to celebrate life, we have invented tools to facilitate the use of sound to make music. In sixteenth century Cremona, Andrea Amati developed the instrument models and construction standards which further refined by his family and colleagues, remain the standards of violin making. But do we know how the violin developed, or what happened before Cremona? Remnants from our most ancient centers of civilization often reveal interest in stringed musical instruments, but the use of the bow to sound them is first known among archers of the Asian steppe nomads. Spreading first to adjacent Asian cultures through trade, conquest, and religion, the idea also travelled on as East and West discovered and explored each other. The Silk Road, for example, brought a great exchange of both culture and commerce. Neither the ancient Greeks nor the Romans knew bowed instruments, but a thousand years before Amati worked in Cremona, Islamic conquests spread knowledge of bowing and developments in instrument construction across the known world. In B.C. before Cremona, John Huber presents that history, and illustrates instrument development with photographic examples. von Huber, John