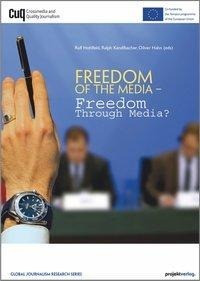 Freedom of the Media - Freedom through Media?

Freedom of the Media - Freedom through Media?

In the shadows of a Russian propaganda war, the tense relationship between raison d'état and freedom of the press becomes evident, when a society such as the one in Ukraine struggles for its existence. Ever since the Ukraine crisis, media democratic promises of salvation for more participation of the civil society are on trial. Yet Western as well as Eastern voices dub the digital reinterpretation of a once promising and prolonged media transition by the Leviathan as the 'fourth insult to humanity'. What, however, will be the significance of quality journalism within the media democracy of the future, if the state, oligarchs and transnational corporations re-assess the value system of state and economic interests versus freedom of the press? These first-hand insights reveal the status quo of media systems in transition countries such as Ukraine, Moldova and Romania - in English as well as the original language versions. It also focuses on a media reality coined by Putin. von Hohlfeld, Ralf