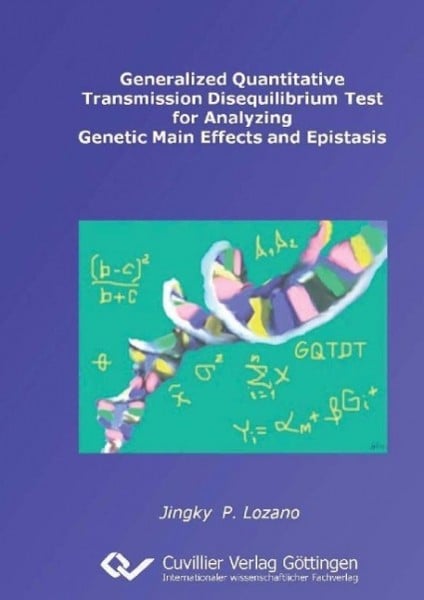 Genetic studies have utilized the Transmission Disequilibrium Test (TDT) to investigate the effect of genes and their interactions (epistasis) on complex diseases such as diabetes mellitus, AlzheimerÆs disease, ischaemic heart disease and cancer. The TDT has been frequently used as a statistical method to analyze genetic effects in family studies due to its robustness to population stratification. The original TDT method by Spielman et al. (Am J Hum Genet, 1993) was designed for qualitative traits (e.g. disease classification: affected / unaffected) but variations have been developed for its application in quantitative traits (QTs) such as blood sugar level, radiation sensitivity and measures of coronary artery calcification. However, the occurrence of nonnormally distributed quantitative traits in candidate gene analysis poses difficulties for statistical methods that are sensitive to distributional assumptions. This study introduces the Generalized Quantitative Transmission Disequilibrium Test (GQTDT) - a statistical method for quantitative traits based on generalized additive models incorporating parental mating type (parental genotype combination) indicator and different parameters of the distribution of the QT response variable in the statistical model. It aims to determine genetic effects (i.e. main effects and epistasis) affecting QTs in family-based studies. The method is based on the Generalized Additive Model for Location, Scale and Shape (GAMLSS, Rigby and Stasinopoulus, Appl Stat, 2005) which allows not only the mean but also other parameters of the conditional distribution of the quantitative trait to be included in the model. The power and type I error of the GQTDT to detect genetic main effects and epistasis were investigated in simulation studies. It has also been applied to real data to determine its applicability in different settings and compare its findings with existing biological data. Genotype data from family trios (parents and one offspring) as well as phenotype data of the offspring were used in the analysis. In the simulation studies, two unlinked biallelic loci and QTs influenced by one or two loci and epistasis were created. The QTs were simulated either as normally distributed or skewed to the right which are commonly encountered in genetic data. Different scenarios such as presence of population stratification and other covariates were also simulated in the data to determine its possible effects in the GQTDT analysis of genetic main effects and epistasis. The performance of the GQTDT in determining genetic main effects is satisfactory both in the normally distributed and skewed quantitative traits. When a fitted distribution is specified in the analysis, higher power can be achieved. In terms of detecting epistasis, good power is noted when the distribution of the quantitative trait is normal. When detecting epistasis in skewed traits, the power is not as high as the power in the normally distributed traits but higher compared to the benchmark method, the Quantitative Transmission Disequilibrium Test with parental mating type indicator (QTDTM; Gauderman, Genet Epi, 2003). The power of the GQTDT is also higher with higher minor allele frequencies, correctly assumed analysis genetic model, larger ôtrueö effect size and bigger sample size. Slightly elevated type I error may be observed in analyzing skewed quantitative traits but like other TDT-like tests, the GQTDT is also robust to the effects of population stratification which causes spurious association. Its application to real data detected genetic main effects and epistasis with known biological evidence. von Lozano, Jingky Pamesa