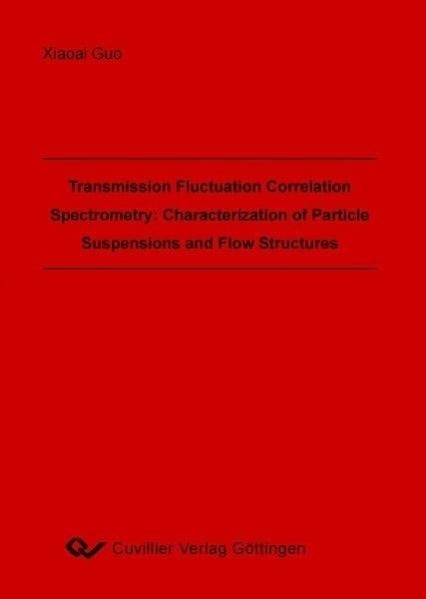 When a beam of light falls upon a flowing particle suspension, the transmitted light intensity fluctuates temporally, depending on the beam diameter and the properties of particle systems. In this thesis a new approach called transmission fluctuation correlation spectrometry (TFCS), including the autocorrelation technique (TFS-AC) and spatial correlation technique (TFS-SC), has been developed in detail and applied to characterize the flowing particle suspensions and flow structures.In view of the concentration effects of hard-core spherical particles in the suspension, a direct correlation function (DCF) of two-dimensional hard sphere fluids was proposed and applied to investigate the transmission fluctuations of radiation through a dense suspension by the TFCS technique. Based on the layer model, a general analytical expression of the expectancy of the transmission product (ETP) was presented under the assumptions of geometrical ray propagation and hard spherical particles in the suspension. Obtained transition spectrum can be applied to extract the particle size distribution (PSD) and particle concentration simultaneously. Furthermore, we extended the theory to the case of crossed beams as well as to the case of partially transparent particles with penetrating radiation. Compared with the expectancy of the transmission square (ETS) in the previous work, the transition function of the ETP in the present work is steeper and hence provides a higher resolution for particle size analysis. Numerical simulations indicate that the transmission fluctuation correlation spectrum is mainly affected by the monolayer structure and significant influences from particle shielding do not exist as long as the beam diameter is much smaller than the particle size. This offers an advantage when doing particle size analysis in dense suspensions.Firstly, the relationship among the particle size, concentration and transmission fluctuations has been investigated experimentally by use of a narrow focussed Gaussian beam, which makes the measurement setup simple. The deviation of extinction or turbidity from Bouguer-Lambert-Beer's law (BLBL) in concentrated particle suspensions has been corrected with three various approaches including Riebel's steric particle-particle interaction model, Vereshchagin's shielding effect approximation and polynomial fit of particle concentration. Experimental results indicated that these three various approaches gave an almost equivalent prediction of extinction or turbidity over a wide range of particle volume concentrations up to about 20% for large particles, though their expressions are different in form. In the limit of low particle concentration, these approaches are equivalent to the BLBL.Secondly, measurements of flowing particle suspensions have been carried out by the TFCS technique. Spatial correlation was realized by changing the distance between dual beams and its advantage is that additional measurement of the flow velocity is unnecessary and hence the measurement is not strongly influenced by the flow conditions. Autocorrelation was realized by varying the autocorrelation time using a single narrow beam, which simplifies the optical arrangement. Two iterative inversion algorithms, i.e., modified Chahine inversion algorithm and relaxation method, were studied and tested with noisy numerical data and experimental data. They proved to be accurate, convergent, stable and suitable to retrieve the information on the PSD and particle concentration from the TFCS data. In this work, the experiments cover a particle size range from 8µm to 3.67mm and a wide dynamic range of particle volume concentration up to about 20% for large particles. It is worth pointing out that the lower and upper limits of the particle size range depend on the beam diameter and the optical path length, respectively. A decrease in the dimensionless optical path length can improve the upper limit of particle volume concentration.Finally, by means of the TFCS technique in combination with the LDV technique, experiments were carried out to investigate the characteristics of the vortex flow structures formed with small particles in the flowing water behind a bluff body. Flow visualization allowed observation of the phenomena at consecutive phases of the vortex shedding by adding small polyester glitter particles to the fluid. The velocity fluctuations associated with vortex shedding were studied by the LDV technique. By Fourier transform of the autocorrelation function of the velocity fluctuations, a power spectrum was obtained and its main spectral line gave vortex shedding frequency. Measurements of the vortex shedding frequency at different positions in the downstream wake of the triangular or circular bluff bodies were performed respectively. It is found that the measured vortex shedding frequency is almost linear with Reynolds number and consistent with the results obtained from Roshko's proposal. As a comparative study, measurements were also carried out in the case of the pulsating flow. Experimental evidences indicate that vortex shedding frequency is disturbed by the pulsation frequency of the fluid. Especially under the most serious conditions, the flow pulsation frequency almost completely obscures the vortex shedding frequency, independent of the measurement positions. Furthermore, the seed particle size, concentration, and local flow structure dimension were measured by the TFCS technique. For comparison, numerical simulations of the vortex flow structures were used as a basis to simulate transmission fluctuation signals and to realize the TFCS measurements. It is found that the 3D experiments are in a qualitative good agreement with the 2D simulations.Therefore, the TFCS technique is very interesting for on-line and in-site applications.