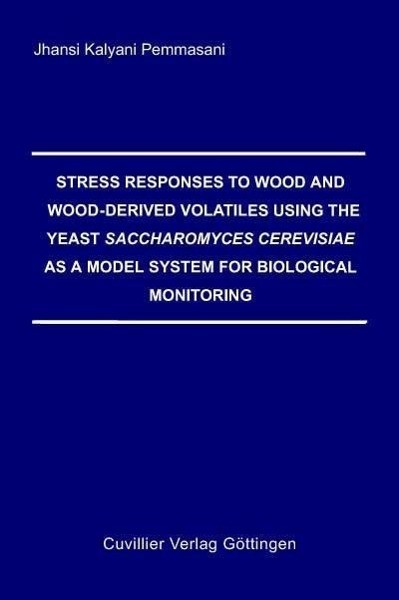 Safeguarding human and environmental resources against harmful agents requires the development of new monitoring devices. Ideally, a device would be able to detect a pollutant, a toxic chemical, or a warfare agent rapidly at relevant concentrations, and in a cost effective manner. Many conventional chemical and physical techniques tend to be expensive. Recently bioreporters are in focus to meet the above criteria. A whole cell bioreporter can be defined as living cell that responds to changes in its environment by displaying a specific and easily measurable signal. Natural and genetically engineered bioreporters are effective research tools for understanding the perception of signals from the environments by living organisms. A bioreporter can be applied as a first detection line for evaluating the toxicity of a mixture of unknown compound composition. Positive reactions could then initiate more focused analysis to identify individual compounds.Wood and wood-related materials are potential sources of harmful volatile organic compounds. Pollution of air, water and soil at the sites of wood production, i.e. forests, from wood processing as well as from wood in service, especially when undergone chemical treatments, contribute to various risks for environment and human health. Wood is widely used as furnishing and building material. Sophisticated insulation of houses leads during the cold months of the year to an increased accumulation of potentially harmful volatile organic compounds (VOCs) that might result in illness of dwelling people. VOCs are known to cause the "sick building syndrome¿, sensory irritation, asthma-related symptoms, and in worst cases cancer. These potential risks necessitate the monitoring of emissions from wood and related sources for taking preventive measures. In the present study, a yeast reporter system has been developed to evaluate VOCs from wood and wood-related sources. A Saccharomyces cerevisiae strain was genetically engineered to act as bioreporter for sensing the toxicity caused by VOCs that might be emitted from wood. The basic construction principle of the yeast bioreporter is a regulatory promoter that is artificially fused with a promoter-less gene coding for the easily measurable ß-galactosidase from Escherichia coli. Activation of the promoter by transcription regulators via interaction with a chemical compound, or acting on an analyte via a complex cellular signaling chain leads to the expression of the reporter gene yielding an output signal that can be detected, here the conversion of X-gal (5-bromo-4-chloro-3-indolyl-beta-D-galactopyranoside) into the blue color indigo due to the action of ß-galactosidase. Regulatory promoters in this study were selected from the yeast genome by performing a microarray analysis with RNA isolated from yeast cells being either exposed to formaldehyde, or a-pinene or fresh pine wood. In addition, promoters reactive to other toxic compounds were selected from literature work. All selected promoters were cloned upstream of a promoter-less lacZ copy in the yeast shuttle vector yEP356R. All constructs were transformed into the S. cerevisiae host strain W303-1A. Agar plate ß-galactosidase assays were performed with the transformed yeast cells under exposure to different concentrations of formaldehyde or a-pinene. Although the general expression patterns and functions of the genes of the selected promoters in yeast are different, similar toxicity responses were obtained with most of the promoters. All constructs but one showed a response in a dose-dependent relationship towards formaldehyde. The promoter with the strongest response was that of the CIN5 gene encoding a basic leucine zipper transcriptional factor of the yAP-1 family. In contrast, none of the promoters showed a measurable effect towards a-pinene. The microarray experiment already revealed before that formaldehyde, a-pinene and VOCs from wood induce quite different sets of genes in the yeast. Formaldehyde preferentially caused expression of genes acting in protein synthesis and of genes acting in the glucose metabolism. a-pinene affected genes in cell wall and cell membrane composition and integrity. VOCs from wood were less aggressive and there was a comparatively minor response on genes in lipid biosynthesis and on genes acting in establishing membrane and cell wall structures. To increase the sensitivity of the host strain to formaldehyde and other toxic VOCs, first genes involved in stress resistance (GTT1, ERG6) were deleted, but deletion strains did not show an increased sensitivity towards formaldehyde. In future, multiple genes must be deleted to enhance the sensitivity of yeast strain. The ERG6 knock-out mutant was further characterized in this work. Deletion of ERG6 causes a sensitivity to cycloheximide, Paracetamol, NaCl, and pH 8.0, indicating that ERG6 is active in response to stresses other than formaldehyde. A stress related gene from the basidiomycete Coprinopsis cinerea encoding an ERG6 (? (24)-sterol C-methyltransferase) related protein (a cyclopropane fatty acid synthase) could not compensate the ERG6 defects in stress responses.