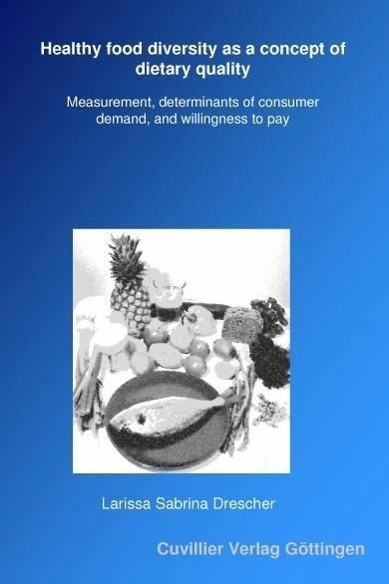 Healthy food diversity as a concept of dietary quality

Healthy food diversity as a concept of dietary quality
Measurement, determinants of consumer demand, and willingness to pay

This study provides an interdisciplinary analysis of healthy food diversity (HFD). A new index, the Healthy Food Diversity-Index, is developed and successfully validated against nutritional background. The first part of the study aims at contributing to the methodological tools that allow the evaluation of whether dietary behaviour is in conformity with dietary recommendations using the concept of HFD for the first time. In the second part, an economic model based on the Consumer Goods Characteristics Model by Ladd and Suvannunt (1976) is developed and demand functions for HFD as well as hedonic price functions are derived. The third part is devoted to the empirical implementation of both the demand and the hedonic analysis. A two-stage least squares regression shows that the demand for HFD is mainly influenced by income, educational and behavioural variables using data from the German Nutrition Survey of 1998. The results of a Box-Cox transformed two-stage least squares regression reveal that German consumers have a positive willingness to pay for HFD, but that their willingness to pay for energy density is higher. Another key finding is that higher education enables a more efficient demand for HFD.