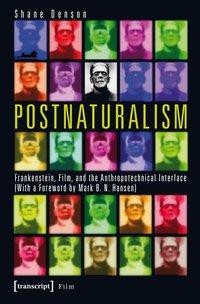 Postnaturalism
Frankenstein, Film, and the Anthropotechnical Interface (With a Foreword by Mark B. N. Hansen)

»Postnaturalism« offers an original account of human-technological co-evolution and argues that film and media theory, in particular, needs to be re-evaluated from the perspective of our material interfaces with a constantly changing environment. Extrapolating from Frankenstein films and the resonances they establish between a hybrid monster and the spectator hooked into the machinery of the cinema, Shane Denson engages debates in science studies and philosophy of technology to rethink histories of cinema, media, technology, and ultimately of the affective channels of our own embodiment.With a foreword by media theorist Mark B. N. Hansen.

Shane Denson (PhD) is Assistant Professor of Film & Media Studies in the Department of Art & Art History at Stanford University. His research interests include film and media theory, seriality, and the philosophy of technology.