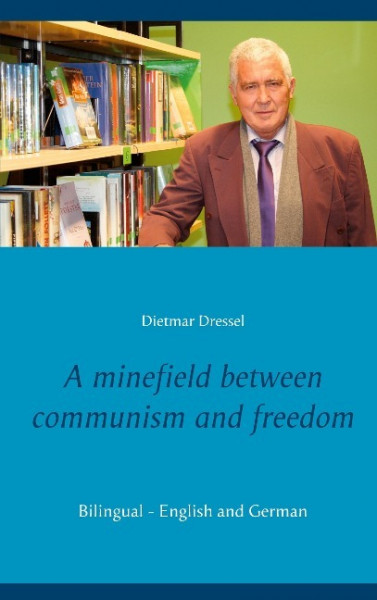 A minefield between communism and freedom

A minefield between communism and freedom
Bilingual - English and German

The FRG in the middle of Europe has been experiencing peace, prosperity and freedom of thought for many years. What one cannot say about the other part of Germany, the GDR. She is not directly at war, but the country is equipped for its size and mentally attuned to war, worse than a great power. The social condition of the population is even more deplorable. There is a lack of everything people need, and those who want to change something peacefully, or want to leave the country in desperation, are either inhumanly imprisoned, tortured and tormented, or killed, tattered or seriously injured by self-firing systems, minefields and volleys from submachine guns mutilated. von Dressel, Dietmar

The time comes when the age of 65 is within reach - finally - one thinks relieved - into retirement. So far so good! It doesn't take long before you celebrate your 66th birthday with your family and realize with increasing impatience that such a day, with its 24 hours, can be quite long. Family, grandchildren, lazing around, traveling and occasional botanical experiments in gardening are no longer enough to give the day an interesting face - what to do? You can't avoid this question if you don't want to doze off on the couch and in front of the television for the rest of your life. Why, I asked myself, rethink the many thoughts and ideas that have accumulated in the course of a lifetime and - if possible, process them in writing. No sooner have such thoughts been thought through than the necessary initiative develops - a study of literature is needed, the head thinks without thinking about the body, which is already 66 years old. It was these three years of study that showed me that creative writing doesn't have to remain a dark secret if you try to reveal it. And something else helped me a lot to tackle the writing seriously - the spiritual "listening in" in order to seek conversations with the consciousness and its inner voice. Many of my friends and readers ask me, how do you manage to write so many books in such a short time? To be honest, I can't even answer this seemingly simple question myself. I think it's my inner voice that wants to argue with me all the time. And so the thoughts flow, as if guided by a ghost hand, almost by themselves into the keyboard of my computer.