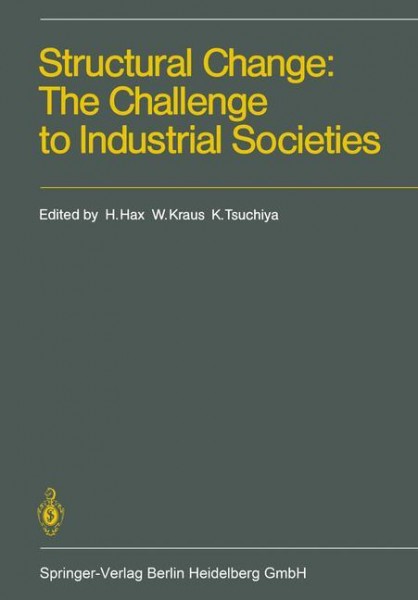 The highly developed industrial countries today have to face the challenge of accelerated structural change. The problems arising from this process are tackled in very different ways. In the public discussion the different approaches of Japan on the one side and of Western European countries on the other have received consider­ able attention. Structural change in its economic, social and political aspects has been the subject of the 8th German-Japanese Seminar on Economics and Social Sciences, held at Cologne from the 24th to the 27th of September, 1984. The tradition of German-Japanese Seminars on Economics and Social Sciences goes back to 1966, when the first meeting was held at Tokyo. Among the first participants were Dr. Hiromi Arizawa, Dr. Kazuo Okochi, both professors at the University of Tokyo, and Dr. Karl Hax, professor at Frankfurt University. The objective of all seminars, which have been held since, has been the analysis of eco­ nomic and social problems of immediate interest in both countries. The records of former seminars, which have been published partly in Japanese, partly in German throw light upon the shift of empha­ sis toward new problems which took place during aperiod of 18 years. von Hax, Herbert und Kraus, Willy und Tsuchiya, Kiyoshi