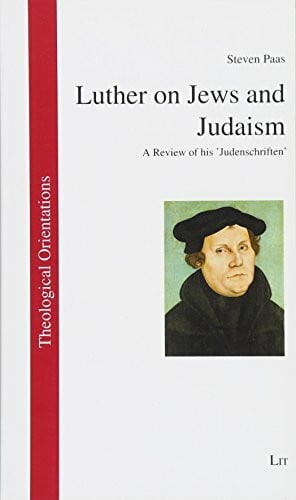 Luther on Jews and Judaism

Luther on Jews and Judaism
A Review of his 'Judenschriften'

This is a study of what and why Luther wrote about the Jews and the religion of Judaism, as part of his theological concept viewed as a whole.Luther: `God wanted to point out that the Messiah would be a brother and a cousin of both the Jews and the Gentiles, if not according to their paternal genealogy, at least according to their maternal nature [Tamar, Ruth, Rahab, and Bathsheba]. Consequently, there is no difference between Jews and Gentiles, except that Moses later separated this people from the Gentiles by a different form of worship and political regime. Moreover, these things were written to make it known to all that the Messiah would gather the Gentiles and the Jews into one and the same Church, just as they are joined by nature and consanguinity.'Lecture in 1544 on Genesis 38:1-5, LW 7, p.15; WA 44, p. 312.

Dr. Steven Paas (1942) published on European and African Church History, the phenomenon of Israelism in the interpretation of Biblical prophecy, and the lexicography of Chichewa, a language widely spoken in Central Africa.