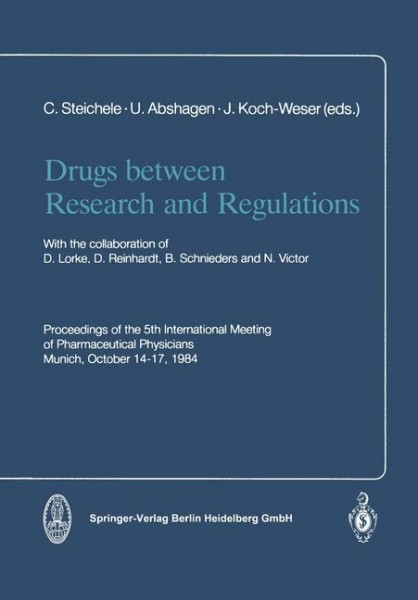 Drugs between Research and Regulations

Drugs between Research and Regulations
Proceedings of the 5th International Meeting of Pharmaceutical Physicians Munich, October 14-17, 1984

Franz Gross died suddenly during preparations for the meeting. He would have taken great pleasure in summarizing in this preface the aims and results of a gathering which so clearly bore his imprint as Chairman of the Scientific Program Committee. His sudden passing away is deeply regretted by all of us: organizers, speakers and participants. We greatly respect him for his exceptional abilities, his impact on science and his qualities as a human being. He provided the impulse for a well balanced and topical scientific program. We therefore dedicate the proceedings of this symposium to his memory. Munich was the fifth in a traditional line of international meetings of pharmaceutical physicians held at three-year intervals, starting in London in 1972 ('International Aspects of Drug Evaluation and Usage'), and followed by Florence in 1975 (,Rationality of Drug Development'), Brussels in 1978 (,Pharmaceutical Medicine - the Future') and Paris in 1981 ('Drug Safety -;- Progress and Controversies'). This 5th meeting discussed improvements in drug development and application and examined the impact of regulatory activities. von Steichele, C. und Abshagen, U. und Koch-Weser, J.