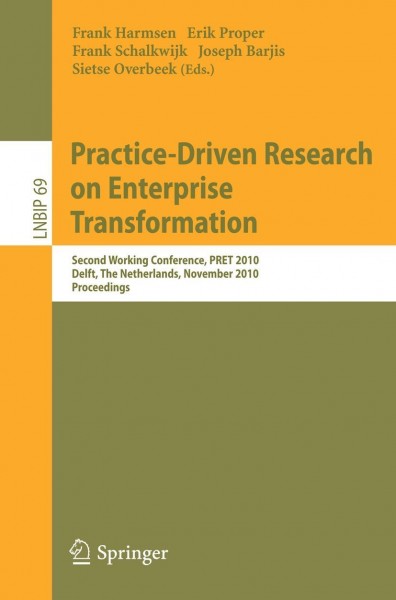 The PRET working conferences are set up as a one-day event in such a way that it attracts an audience from both industry and academia. PRET 2010 was a continuation of the PRET 2009 working conference, which was organized as the industrial track at the 2009 CAiSE conference. The PRET 2010 working conference was organized as part of theenterpriseengineering week, and was co-located with PoEM 2010 and TEAR 2010 in Delft. The statement that modern-day enterprises are in a constant state of ?ux is in 2010 even more true than it was in 2009. The markets are in a state of confusion and seem to have no direction at all, as they are swinging back and forth depending on often contradictory signals and economic forecasts. As a consequence, enterprises, be they private businesses, government departments or other organizations, are taking their measures. Restructuring, divesting, - proving performance and merging are among the usual transformationactivities thatenterprisesconducttoprovideanswerstotheever-challengingdemandsthat are put on them. In addition to the tricky economic situation, developments like globalization, rapid technologicaladvancement, aging and the changing mindset of customers contribute to a situation in which nothing is certain anymore and in which change is the only constant. PRET approaches these developments and the impact they have on ent- prises from a holistic enterprise engineering perspective. von Harmsen, Frank und Schalkwijk, Frank und Barjis, Joseph und Overbeek, Sietse und Proper, Erik