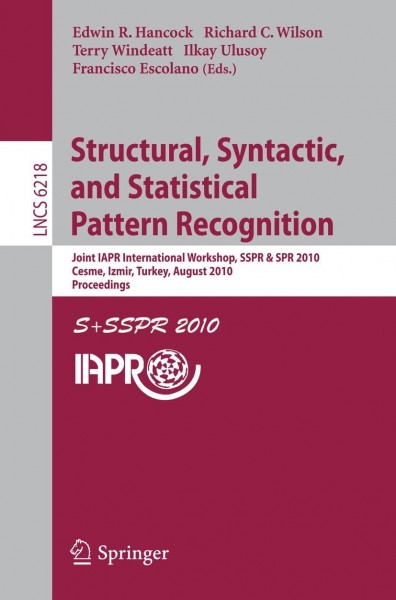 This volume in the Springer Lecture Notes in Computer Science (LNCS) series contains the papers presented at the S+SSPR 2010 Workshops, which was the seventh occasion that SPR and SSPR workshops have been held jointly. S+SSPR 2010 was organized by TC1 and TC2, Technical Committees of the International Association for Pattern Recognition(IAPR), andheld inCesme, Izmir, whichis a seaside resort on the Aegean coast of Turkey. The conference took place during August 18-20, 2010, only a few days before the 20th International Conference on Pattern Recognition (ICPR) which was held in Istanbul. The aim of the series of workshops is to create an international forum for the presentation of the latest results and exchange of ideas between researchers in the ?elds of statistical and structural pattern recognition. SPR 2010 and SSPR 2010 received a total of 99 paper submissions from many di?erent countries around the world, giving it a truly international perspective, as has been the case for previous S+SSPR workshops. This volume contains 70 accepted papers, 39 for oral and 31 for poster presentation. In addition to par- lel oral sessions for SPR and SSPR, there were two joint oral sessions of interest to both SPR and SSPR communities. Furthermore, to enhance the workshop experience, there were two joint panel sessions on "Structural Learning" and "Clustering," in which short author presentations were followed by discussion. Another innovation this year was the ?lming of the proceedings by Videol- tures. von Hancock, Edwin R. und Wilson, Richard C. und Windeatt, Terry und Ulusoy, Ilkay und Escolano, Francisco