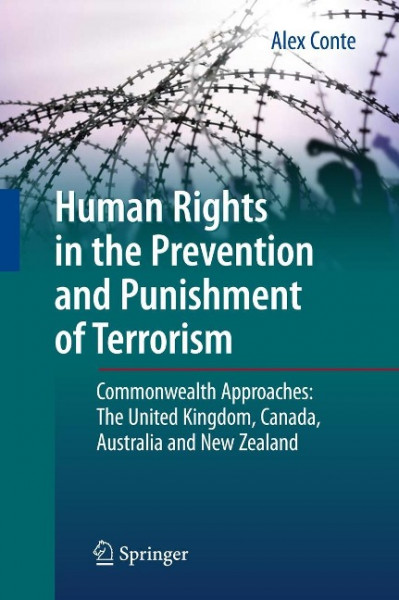 Human Rights in the Prevention and Punishment of Terrorism

Human Rights in the Prevention and Punishment of Terrorism
Commonwealth Approaches: The United Kingdom, Canada, Australia and New Zealand

The objective of this work is to provide an analysis of the legislative approaches to counter-terrorism and human rights in Australia, Canada, New Zealand and the United Kingdom. The text is aimed at lawyers and practitioners within and outside common law nations. Although the text analyses the subject within the four jurisdictions named, many parts of the book will be of interest and relevance to those from outside those jurisdictions. Considerable weight is placed on inter- tional obligations and directions, with a unique and hopefully useful feature of the text being the inclusion and consideration of a handbook written by me on human rights compliance when countering terrorism (set out in Appendix 4 and considered in Chap. 13). A signi?cant part of the research undertaken for this work was as a result of my being awarded the International Research Fellowship, Te Karahipi Rangahau a Taiao, an annual fellowship generously funded by the New Zealand Law Foun- tion. The New Zealand Law Foundation is an independent trust and registered charitable entity under the Charities Act 2005 (NZ). This project would not have been possible without the Law Foundation's award, which allowed me to undertake research and associated work over reasonably lengthy periods of time in Australia, Canada, Israel, England, Austria, Switzerland and Finland. It is not just the g- graphical location of this work that was made possible, however. von Conte, Alex