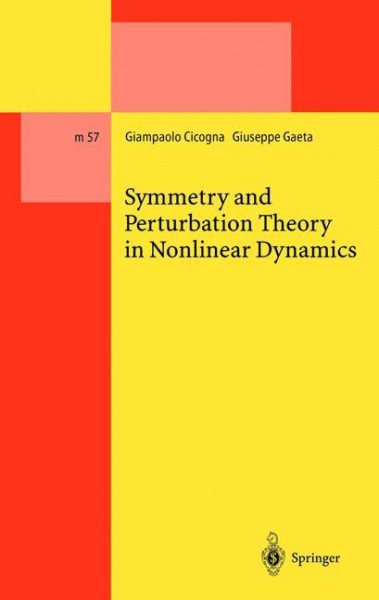 has been in the of a Symmetry major ingredient development quantum perturba tion and it is a basic of the of theory, ingredient theory integrable (Hamiltonian and of the the use in context of non Hamiltonian) systems; yet, symmetry gen eral is rather recent. From the of view of nonlinear perturbation theory point the use of has become dynamics, widespread only through equivariant symmetry bifurcation in this attention has been confined to linear even theory; case, mostly symmetries. in recent the and of methods for dif Also, theory practice symmetry years ferential has become and has been to a equations increasingly popular applied of the of the book Olver This by variety problems (following appearance [2621). with is and deals of nature theory deeply geometrical symmetries general (pro vided that described i.e. in this context there is are vector no they by fields), to limit attention to linear reason symmetries. In this look the basic tools of i.e. normal book we at perturbation theory, introduced Poincar6 about and their inter a forms (first by century ago) study action with with no limitation to linear ones. We focus on the most symmetries, basic fixed the and i.e. a setting, systems having point (at origin) perturbative around thus is local.