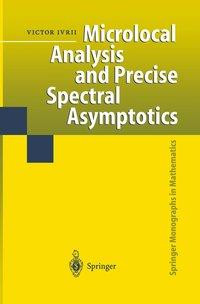 The problem of spectral asymptotics, in particular the problem of the asymptotic dis­ tribution of eigenvalues, is one of the central problems in the spectral theory of partial differential operators; moreover, it is very important for the general theory of partial differential operators. I started working in this domain in 1979 after R. Seeley found a remainder estimate of the same order as the then hypothetical second term for the Laplacian in domains with boundary, and M. Shubin and B. M. Levitan suggested that I should try to prove Weyl's conjecture. During the past fifteen years I have not left the topic, although I had such intentions in 1985 when the methods I invented seemed to fai! to provide furt her progress and only a couple of not very exciting problems remained to be solved. However, at that time I made the step toward local semiclassical spectral asymptotics and rescaling, and new horizons opened. von Ivrii, Victor