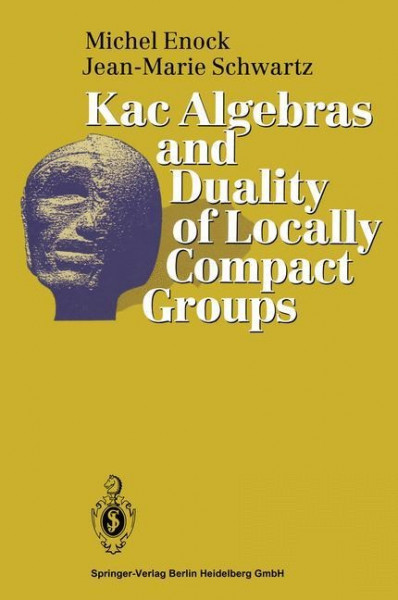 This book deals with the theory of Kac algebras and their dual­ ity, elaborated independently by M. Enock and J . -M. Schwartz, and by G. !. Kac and L. !. Vajnermann in the seventies. The sub­ ject has now reached a state of maturity which fully justifies the publication of this book. Also, in recent times, the topic of "quantum groups" has become very fashionable and attracted the attention of more and more mathematicians and theoret­ ical physicists. One is still missing a good characterization of quantum groups among Hopf algebras, similar to the character­ ization of Lie groups among locally compact groups. It is thus extremely valuable to develop the general theory, as this book does, with emphasis on the analytical aspects of the subject instead of the purely algebraic ones. The original motivation of M. Enock and J. -M. Schwartz can be formulated as follows: while in the Pontrjagin duality theory of locally compact abelian groups a perfect symmetry exists between a group and its dual, this is no longer true in the various duality theorems of T. Tannaka, M. G. Krein, W. F. Stinespring . . . dealing with non abelian locally compact groups. The aim is then, in the line proposed by G. !. Kac in 1961 and M. Takesaki in 1972, to find a good category of Hopf algebras, containing the category of locally compact groups and fulfilling a perfect duality. von Enock, Michel und Schwartz, Jean-Marie