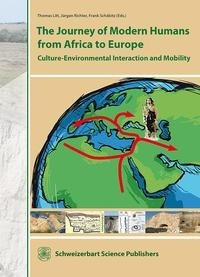 The Journey of Modern Humans from Africa to Europe

The authors shed new light on the time frame and pathways followed by Homo sapiens on its journey from Africa to Europe and provides new insights into the intricate interplay of culture and environment during the past 200,000 years. The new findings also take into account the paleoclimatic and paleoenvironmental history of East, North-East and North-West Africa, the Middle East, South-East and Central Europe as well as the Iberian Peninsula. The book is a compilation of the key results of a multidisciplinary research project (CRC 806, funded by the German Research Foundation DFG) which studied the dispersal of anatomical modern humans from Africa to Europe. The findings presented here are based on a wealth of new data of recent, intensive studies of archaeological sites, lake sediments and Loess archives which were dated using radiocarbon, luminescence, Uranium/Thorium and paleomagnetic methods. Models based on recent ethnological findings from Africa sharpen our understanding of the possible mixing of societies in the past. Moreover, complex algorithms such as the "Human Dispersal Model” which describes the expansion of hunter-gatherer societies and population development are presented for South-Eastern to Central Europe between 45,000 and 25,000 years ago. Last but not least, educational theories, teaching material and an Open Educational Resource are presented to facilitate the integration of the results from CRC 806 into school-class lectures and to foster competencies in argumentation and comparison. The data presented in this full-color volume are a valuable reference for experts in archaeology, geosciences, anthropology and ethnology including life-science students and academics. The book may be used as a textbook for graduate and undergraduate students, for interested school teachers and the public. It should be attractive and relevant to all readers interested in understanding the pre-history of our own species, their migration routes and motivation to migrate, triggered by complex interactions of their culture and environment. von Litt, Thomas und Richter, Jürgen und Schäbitz, Frank