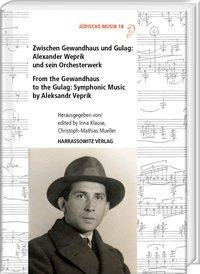 This publication collates contributions from the international symposium Saved From Oblivion. Symphonic Music by Aleksandr Veprik. Together with a CD recording it intends to call back into general consciousness the music of the Jewish composer Aleksandr Veprik, who in the 1920s was considered one of the greatest compositional hopes of the Soviet Union, yet was subsequently broken by this very state. The motivation for the project was the great emotional power of Veprik's expressive music, which immediately touches the hearts of both listeners and performers. The contributions to this book include biographical and analytical aspects, as well as a source edition of Veprik's letters from his trip to Europe in 1927. The complete collection is published here for the first time. von Klause, Inna und Mueller, Christoph-Mathias