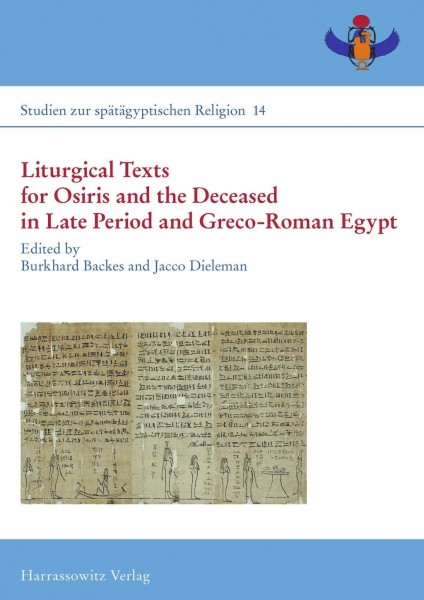 Liturgical Texts for Osiris and the Deceased in Late Period and Greco-Roman Egypt; Liturgische Texte

Liturgical Texts for Osiris and the Deceased in Late Period and Greco-Roman Egypt; Liturgische Texte
Proceedings of the colloquiums at New York (ISAW), 6 May 2011, and Freudenstadt, 18-21 July 2012

This collection of 15 essays throws light on the large and oft-neglected corpus of Osiris liturgies. These texts preserve the incantations and instructions for rituals performed in the temple cult of Osiris, the Egyptian god of death and regeneration. Although composed for use in state-sponsored temples, most copies have been found in private burials of the Late and Greco-Roman periods, inscribed on the walls of tombs and sarcophagi or on papyrus scrolls. Not only do the preserved copies offer precious information about the cult of Osiris but also about transformations in equipping the dead with funerary texts in these later periods of pharaonic history. The essays of this volume, presented in English, German and French, explore this interface of temple and tomb. They offer reflections on methodology, showcase new approaches and examine the scribal culture that produced these documents. Well-known compositions such as the Sakhu or Glorification Rituals, the Embalming Ritual and the Mouth Opening Ritual are discussed as well as new inscriptions and papyri that remain unedited to this day. Together these essays add to our understanding of the production and use of funerary texts, old and new, in late Pharaonic and Greco-Roman Egypt. von Backes, Burkhard