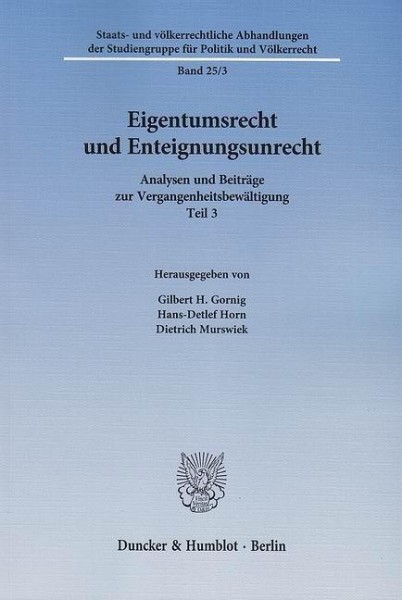 Coming to terms with the past in accordance with the rule of law calls for more than those - necessary - efforts of governmental culture policies of remembrance. For remedying and compensation of the expulsion and expropriation after the Second World War something has to be done. Where governmental injustice raged, a constitutional state cannot and must not leave the victims and their relatives alone with the consequences. Some positive basic approaches of a deepened legal consciousness are visible here, as are, however, certain persistent deficits. It is necessary to wrest this topic away from political manipulation and tabooing by keeping the discourse open about justice in coming to terms with the past on a national level as well as across national boundaries and by reconciling it with the European fundamental principles of law, freedom and property. The third symposium of the Study Group for Politics and International Public Law (after 2006 and 2008) again aims at contributing analyses and inputs to that process. The volume is to publish the revised and updated reports given in 2010. von Gornig, Gilbert H.