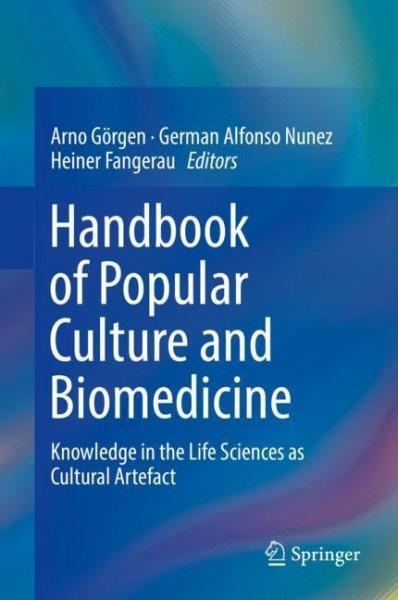 Handbook of Popular Culture and Biomedicine

This handbook explores the ways biomedicine and pop culture interact while simultaneously introducing the reader with the tools and ideas behind this new field of enquiry. From comic books to health professionals, from the arts to genetics, from sci-fi to medical education, from TV series to ethics, it offers different entry points to an exciting and central aspect of contemporary culture: how and what we learn about (and from) scientific knowledge and its representation in pop culture. Divided into three sections the handbook surveys the basics, the micro-, and the macroaspects of this interaction between specialized knowledge and cultural production: After the introduction of basic concepts of and approaches to the topic from a variety of disciplines, the respective theories and methods are applied in specific case studies. The final section is concerned with larger social and historical trends of the use of biomedical knowledge in popular culture. Presenting over twenty-five original articles from international scholars with different disciplinary backgrounds, this handbook introduces the topic of pop culture and biomedicine to both new and mature researchers alike. The articles, all complete with a rich source of further references, are aimed at being a sincere entry point to researchers and academic educators interested in this somewhat unexplored field of culture and biomedicine. von Görgen, Arno und Nunez, German Alfonso und Fangerau, Heiner

From 2008 to 2014, Prof Dr Fangerau was professor of "History, Philosophy and Ethics of medicine" and founding Director of the Institute of the History, Philosophy and Ethics of Medicine, Ulm University. Between 2014 and 2015, Prof Dr Fangerau held a professorship for "History and Ethics of Medicine", University of Cologne, while acting as director of the Institute for the History and Ethics of Medicine at the same institution. In 2016, he has been appointed Director of the Institute for the History, Philosophy and Ethics of Medicine, University of Düsseldorf. He has published more than a hundred articles in a variety of subjects related to the history and ethics of medicine, as well as two monographs. Additionally, he has co-edited 9 books, three of them with Springer (one handbook on research ethics with C. Lenk and G. Duttge, one book analysing the institutional and intellectual links between urologists in both the Federal Republic and the German Democratic Republic and one book on the history of the German Association of Child and Adolescence Psychiatry between 1940 and 1960). His main focus of research is the history of biomedicine in the late 19th and 20th centuries, the history and ethics of psychiatry and network analyses in the history of medicine. Mr Görgen received his M.A.in 2008 from the University of Augsburg, where he studied European cultural history. From 2009 to 2017 he has worked with Heiner Fangerau at the Institutes of the History, Philosophy and Ethics of Medicine at Ulm University, University of Cologne and Heinrich Heine Universität Düsseldorf. Since 2018, he is researching "horror-game-politics" and specifically bio-horror games at the HKB Bern University of the Arts. He has published extensively in the field of bioethics, biomedicine and popular culture, and possesses a strong background in discourse analysis, literary theory, and game studies. Besides medical tropes in pop culture, his research interests include science communication, media history of child abuse and child protection, the bioethics of posthumanism, eHealth and others. Dr German Alfonso Nunez Having recently received his Ph.D. from the Transnational Art, Identity and Nation Research Centre (TrAIN) at the University of the Arts London, today Dr Nunez holds a São Paulo Research Foundation (FAPESP) fellowship and is currently based at the Faculty of Philosophy, Languages and Human Sciences (FFLCH) of the University of São Paulo (USP). A past committee member of the Computers and the History of Art Group (CHArt, London) and contributing writer for the Studio International journal (New York/London), his research is concerned with the historical development of artistic practices that intersect with technology and science. Apart from his scholarly research, he has been a practicing artist for the past ten years, presenting his artworks in more than 20 exhibitions worldwide. In 2011, alongside his art collective [+zero], he was nominated for the prestigious PIPA Contemporary Art award prize, in Brazil.