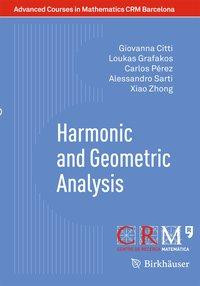 This book contains an expanded version of lectures delivered by the authors at the CRM in Spring of 2009. It contains four series of lectures. The first one is an application of harmonic analysis and the Heisenberg group to understand human vision. The second and third series of lectures cover some of the main topics on linear and multilinear harmonic analysis. The last one is a clear introduction to a deep result of De Giorgi, Moser and Nash on regularity of elliptic partial differential equations in divergence form. von Citti, Giovanna und Grafakos, Loukas und Pérez, Carlos und Sarti, Alessandro und Zhong, Xiao