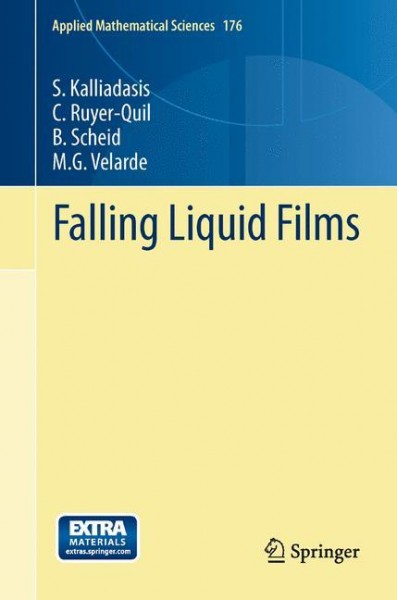 Falling Liquid Films gives a detailed review of state-of-the-art theoretical, analytical and numerical methodologies, for the analysis of dissipative wave dynamics and pattern formation on the surface of a film falling down a planar inclined substrate. This prototype is an open-flow hydrodynamic instability, that represents an excellent paradigm for the study of complexity in active nonlinear media with energy supply, dissipation and dispersion. It will also be of use for a more general understanding of specific events characterizing the transition to spatio-temporal chaos and weak/dissipative turbulence.  Particular emphasis is given to low-dimensional approximations for such flows through a hierarchy of modeling approaches, including equations of the boundary-layer type, averaged formulations based on weighted residuals approaches and long-wave expansions. Whenever possible the link between theory and experiment is illustrated, and, as a further bridge between the two, the development of order-of-magnitude estimates and scaling arguments is used to facilitate the understanding of basic, underlying physics. This monograph will appeal to advanced graduate students in applied mathematics, science or engineering undertaking research on interfacial fluid mechanics or studying fluid mechanics as part of their program. It will also be of use to researchers working on both applied, fundamental theoretical and experimental aspects of thin film flows, as well as engineers and technologists dealing with processes involving isothermal or heated films. This monograph is largely self-contained and no background on interfacial fluid mechanics is assumed. von Kalliadasis, Serafim