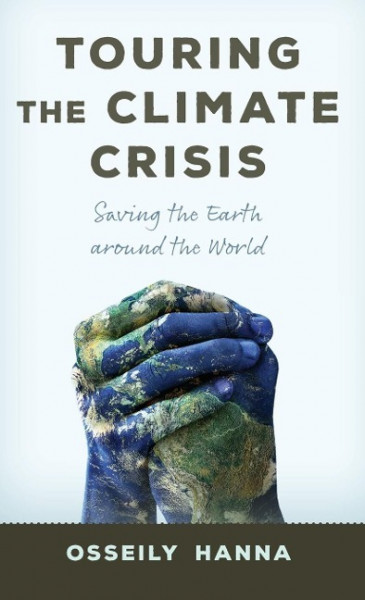 Touring the Climate Crisis
Saving the Earth Around the World

Osseily Hanna invites readers to join him on his 6-year journey across 32 countries to hear from the people fighting climate change locally, and what they are doing to beat it. In Touring the Climate Crisis: Saving the Earth Around the World, Osseily Hanna documents his journey to explore how the climate is changing and affecting people in both the Global North and Global South. That journey took him across five continents over the course of six years and felt similar to walking along a tightrope: on one side he witnessed death, destruction, and destitution, while on the other he saw the capacity of the human spirit to overcome seemingly impossible obstacles. From gold miners in South Africa and a nuclear bomb survivor in Hiroshima, to the diversity and beauty of bees in Germany and Uganda, and part of the Atlantic forest that was brought back to life in Brazil, Hanna's journey is one that seeks to unravel the beauty and capacity of both the natural world and the human spirit.As Hanna discovers, the duality of life coexisting with death, and hope sprouting from fear in a world whose climate and future are changing more rapidly than ever before, become the drivers of his inspiration and motivation to push further still, and relay the urgency of the situation our world today faces. A travelogue of the courageous work done by people who are fighting climate change as well as the factors that are causing it, Touring the Climate Crisis breaks down issues such as deforestation, mining, and industrial agricultural processes and includes the author's own photography from his journey around the world. von Hanna, Osseily

Osseily Hanna was born in London in 1978. He studied chemistry at King's College London, followed by a master's degree in computer science at the University of Hertfordshire. He is a bilingual English-Spanish speaker and has studied several languages. He gave up a successful career in global financial markets in 2011 to write his first book, Music and Coexistence, which has been published in five languages. Traveling the Climate Crisis is his second book.