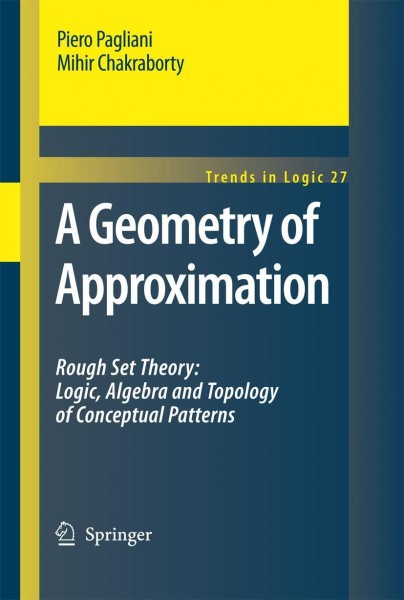 A Geometry of Approximation

'A Geometry of Approximation' addresses Rough Set Theory, a field of interdisciplinary research first proposed by Zdzislaw Pawlak in 1982, and focuses mainly on its logic-algebraic interpretation. The theory is embedded in a broader perspective that includes logical and mathematical methodologies pertaining to the theory, as well as related epistemological issues. Any mathematical technique that is introduced in the book is preceded by logical and epistemological explanations. Intuitive justifications are also provided, insofar as possible, so that the general perspective is not lost. Such an approach endows the present treatise with a unique character. Due to this uniqueness in the treatment of the subject, the book will be useful to researchers, graduate and pre-graduate students from various disciplines, such as computer science, mathematics and philosophy. It features an impressive number of examples supported by about 40 tables and 230 figures. The comprehensive index of concepts turns the book into a sort of encyclopaedia for researchers from a number of fields. 'A Geometry of Approximation' links many areas of academic pursuit without losing track of its focal point, Rough Sets. von Pagliani, Piero

Piero Pagliani: After studies in Logic, Philosophy of Science, Linguistic, Mathematics and Computer Science, Piero Pagliani graduated in Philosophy at the State University of Milan. Italy. After serving large IT companies, at present Piero Pagliani is a knowledge management consultant. A researcher in the field of algebraic logic and expert systems, he is the author of a number of scientific papers and co-author of three books on Rough Set Theory published by Physica-Verlag. Piero Pagliani had been a lecturer in Model Theory at the Faculty of Computer Science of the University of Rome "La Sapienza" and gave talks and lectures in China, France, Germany, Japan, Poland, Romania, Canada, USA and India, where he collaborates with the Calcutta Logic Circle and the Department of Pure Mathematics of the University of Calcutta.Mihir K. Chakraborty: Received Masters Degree in Pure Mathematics from the university of Calcutta and Ph. D. in Functional Analysis from the University of Kalyani, West Bengal, India. Tought in several universities. At present Professor of Pure Mathematics, University of Calcutta. Held visiting assignments in variuos institutions and universities of India and abroad. Founder of Calcutta logic circle and mebber of many academic bodies of India and abroad e.g. the editorial board of TRS. Published about 100 articles in international journals. Research interest : Logic, Rough Set Theory, Fuzzy set Theory, Many valued Logics, Non-monotonic Logics, Algebraic Logic ,Functional Analysis, Foundation and philosophy of mathematics and science.