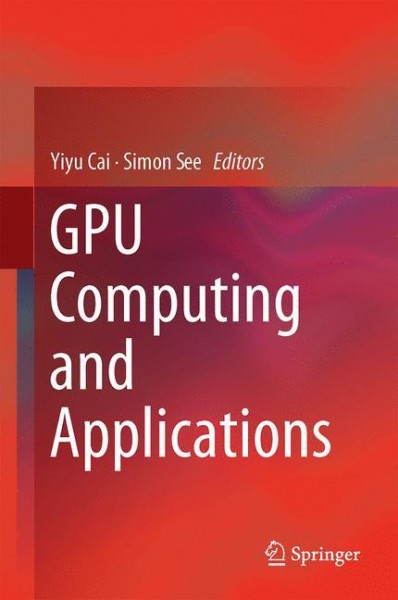 This book presents a collection of state of the art research on GPU Computing and Application. The major part of this book is selected from the work presented at the 2013 Symposium on GPU Computing and Applications held in Nanyang Technological University, Singapore (Oct 9, 2013). Three major domains of GPU application are covered in the book including (1) Engineering design and simulation; (2) Biomedical Sciences; and (3) Interactive & Digital Media. The book also addresses the fundamental issues in GPU computing with a focus on big data processing. Researchers and developers in GPU Computing and Applications will benefit from this book. Training professionals and educators can also benefit from this book to learn the possible application of GPU technology in various areas. von Cai, Yiyu und See, Simo

Dr. Cai has over 20 year research experience developing 3D and simulation technology with the aid of GPUs for applications in engineering, bio-medicine, interactive & digital media, and education. His research has been supported by both public and private sectors. He was deputy director of NTU's Bio-informatics Research Centre, and technical director of Computer-aided Engineering Labs, deputy director of Nanyang Centre for Supercomputing and Visualization, deputy director of Centre for Advanced Numerical and Engineering Simulation. He has published over 150 papers in peer-reviewed international journals and conferences and also has edited 6 books or journal special issues. He is associate editor with the journal Simulation and Gaming, and sits in editorial boards of several international journals. Part of his innovative and interdisciplinary research was or is being exhibited in Singapore Art Museum, Singapore Science Centre, and China National Science and Technology Museum. Dr Cai has co-organised several major international or regional conferences, and is keynote speakers or invited speakers at several international conferences. He has co-invented 5 patents granted or pending approval. He was former co-President of the International Simulation and Gaming Association.Dr. Simon See is currently the High Performance Computing Technology Director and Chief Solution Architect for nVIDIA Inc, Asia and also a Professor and Chief Scientific Computing Officer in Shanghai Jiao Tong University. Concurrently Professor See is also the Chief Scientific Computing Advisor for BGI (China). His research interests are in the area of High Performance Computing, computational science, Applied Mathematics and simulation methodology. He has published over 100 papers in these areas and has won various awards.Professor Nadia Magnenat-Thalmann is Editor-in-Chief of The Visual Computer Journal published by Springer Verlag, Co-Editor-in-Chief of the journal Computer Animation and Virtual Worlds published by Wiley and Associate Editor of many other scientific journals. Together with her PhD students, she has published more than 500 papers and books on Virtual Humans and Social Robots with research topics such as 3D clothes, hair, body gestures, emotions modelling, and medical simulation. She has been invited to give more than 300 keynote lectures in various institutions and organizations, among them the World Economic Forum in Davos. She was Vice-Rector at the University of Geneva from 2003-2006. She is a Member and President of high level international evaluation committees, among the recent ones the Jury of the Vienna Science and Technology Fund, the Advisory Board for Computer Science at Tsinghua University in Beijing, China, the Canada Excellence Research Chairs Review Panel in Ottawa and the European Research Council. During her Career, she has received more than 30 Awards such as "Woman in the Year", the early recognition in Montreal in 1987. Among the recent ones, she was awarded a Doctor Honoris Causa in Natural Sciences from the Leibniz University of Hanover in Germany in 2009, the Distinguished Career Award from the European Association for Computer Graphics in Norrkoping, Sweden and an Honorary Doctorate of the University in Ottawa in 2010 and a Career Achievement Award from the Canadian Human Computer Communications Society in Toronto in 2012. Very recently, she received the prestigious Humboldt Research Award in Germany given to "academics whose fundamental discoveries, new theories, or insights have had a significant impact on their own discipline and who are expected to continue producing cutting-edge achievements in the future". Besides directing her research group MIRALab in Switzerland, she is presently Professor and Director of the Institute for Media Innovation (IMI) at Nanyang Technological University, Singapore.